A Slap in the Face for Serving your Country: Soldiers Fight Back

Imagine coming home after serving your country in the military, only to get demoted or fired when you get back to work.

The sad truth is that many Americans are being penalized for their contributions to the military. Whether it's a day-long drill with the National Guard, a two-week stint as a reservist, or a longer stint overseas, soldiers are coming home and are embraced everywhere except at work, where they often are snubbed by their employers by way of demotion, or worse. 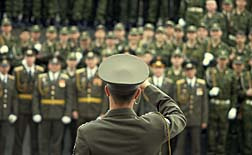 Not only is it morally reprehensible, it is also against the law.

The Uniformed Services Employment and Reemployment Rights Act (USERRA) governs the framework of a returning employee absent for military purposes, protecting the employee's rights within that context, and sets forth requirements pertaining to the conduct of the employer in such circumstances.

Put simply, employers do not have the right to turn away or penalize employees returning from military service of any kind without just cause. The fact that they've simply been AWOL from work just doesn't cut it in the eyes of the law.

A few cases have tested that law and one in particular: Patton vs. Target Corporation.

National Guardsman James Patton sued his employer after he was fired from his job in Albany upon returning from two weeks active service with the National Guard. He was initially demoted. When he challenged that demotion, he was fired.

Patton fought back and litigated under the Federal Soldiers' and Sailors' Relief Act, which is another statute looking out for the rights of soldiers and protects those in the military from undue discrimination. He also sued Target for damages under Oregon law, for wrongful dismissal.

Carl Adams may want to think about calling his lawyer as well.

At 26, he followed in his father's footsteps by getting a job as a Sheriff's deputy with the Sedgewick County Sheriff's Department, in Colorado. He was also a military man, devoting one day each month for drills with the National Guard.

He thought he had the best of both worlds at the age of 26 - until he began taking heat from his superiors for being away so much. As the Sedgewick County Sheriff's Department is a small unit, it was understandably a frustration for the employer to cover Adams' shifts while he was away. Still, the law was on Adams' side. And there are repercussions if a National Guardsman fails to report to his unit.

Such was the issue back in May, when Adams' unit required a four-day drill, which included a weekend. As new hires routinely work weekends in the Sheriff's department, there was an obvious conflict, and according to Adams his employer - aware of the drill taking place - made no effort to schedule around him.

In essence, Adams was double-booked. He knew that not reporting for his job would be ill-advised. However, not reporting to his National Guard unit would be considered Away Without Leave, punishable by possible jail time.

He went to the drill. Upon his return, Adams was greeted with a suspension without pay for failure to show up for work. He resigned from the department later that month, and has filed a complaint with the U.S. Department of Labour. If there are USERRA violations found, the employer may have to re-instate Adams, complete with lost wages.

More News
The Uniformed Services Employment and Reemployment Act, "prohibits discrimination against a person because of their service in the Armed Forces Reserve, the National Guard or other uniformed services. USERRA prohibits an employer from denying any benefit of employment on the basis of an individual's membership, application for membership, performance of service, application for service, or obligation for service in the uniformed services. USERRA also protects the right of veterans, reservists, National Guard members, and certain other members of the uniformed services to reclaim their civilian employment after being absent due to military service or training."

There are more then two million U.S. citizens currently in active duty in the military, or serving as reservists.

Sixty per cent of James Patton's $900,000 award for punitive damages automatically goes into the crime victim's assistance fund for the State of Oregon. But Patton gets to keep the rest. He was also awarded $84,970 in compensatory damages, over his dispute with Target.