FDA Warns Against Off Label Angioplasty Treatment Known as TVAM

The FDA is taking the unusual step of calling out a specific doctor and warning people to steer clear of the use of TVAM angioplasty as a treatment for serious illnesses such as Parkinson’s disease, Multiple Sclerosis and other autonomic disorders. 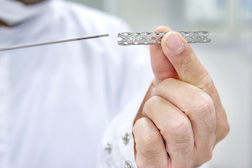 According to the FDA safety communication issued on March 8, 2017 the procedure is being offered in the US by “at least one physician, Dr. Michael Arata”. The procedure, known as Transvascular Autonomic Modulation (TVAM), is being promoted as an effective way to “treat the signs and symptoms” of a number of these kinds of debilitating neurological diseases.

The FDA safety communication says people considering such an option should be aware the TVAM procedure is not an approved treatment for these types of illnesses and Dr. Arata has not submitted any scientific evidence to the FDA to support claims that patients can benefit from a TVAM procedure.

In fact, the FDA warns that the procedure has been connected to at least one death and could result in serious injuries, such as stroke, blood clots, cranial nerve damage, or abdominal bleeding.

Angioplasty has been used for decades as a way to clear blocked arteries in cardiac patients and is considered safe and effective by the FDA. The TVMA procedure uses the balloon device to expand the vein walls.

“This is not what angioplasty was developed for. This is an off label use of the procedure and as a medical doctor myself and as an attorney I would certainly agree with the warning the FDA has produced,” says Dr. Shezad Malik, a Dallas based physician and attorney who represents people in medical malpractice cases.

According to the FDA safety communication TVAM “procedure is performed by threading a catheter into a patient’s venous system, such as the jugular vein, where a balloon attached to the catheter inflates to widen the vein walls.”

“Balloon angioplasties are used for dilating blocked vessels in the heart,” says Dr. Malik. “But what this doctor is doing is using angioplasty as an experimental procedure. He has no data or authorized research. He is using the procedure off-label meaning it has not been FDA approved.”

The March 8, 2017 safety communication is the second time the FDA has issued a warning about the off-label use of TVAM angioplasty. In 2012, after issuing a warning against using this procedure to treat Chronic Cerebrospinal Venous Insufficiency (CCVI), the FDA received “one medical device report of a balloon rupturing during placement in a patient’s jugular vein. Physicians ultimately determined the balloon had migrated to the patient’s lung, requiring surgery to remove the ruptured balloon.”

More TVAM INJURY News
“The problem is that when people have serious diseases like these and there is no cure people begin to look at procedures that offer them hope but in fact are quite ineffective,” says Dr. Malik. “In this case, as we know from the FDA warning, the procedure could be extremely dangerous.”

The FDA safety communication says patients who have undergone the procedure, should be monitored by physicians “for potential complications such as excessive pain, discomfort, bruising, excessive bleeding from the puncture site, and stroke or stroke-like complications.”

Patients who have experienced adverse effects from a TVAM procedure, should file a report through MedWatch, the FDA Safety Information and Adverse Event Reporting program.

If you or a loved one have suffered losses in this case, please click the link below and your complaint will be sent to a drugs & medical lawyer who may evaluate your TVAM Injury claim at no cost or obligation.
Request Legal Help Now