The announcement that Fidelma Fitzpatrick is lead counsel for Essure victims should have Bayer even more concerned that litigation may find in favor of plaintiffs. “In a case like [Essure] where we’re talking about birth control devices and women’s health issues it’s particularly important to have women represented,” said Fitpatrick. 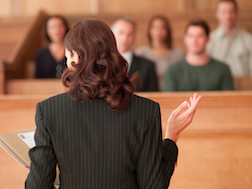 Fitzpatrick, a partner in the Rhode Island law firm of Motley Rice, is representing hundreds of women claiming they were injured by Essure. She has also represented women who were allegedly harmed by other medical devices, including transvaginal mesh and Mirena IUD. (Essure is a permanent birth control which does not require a surgical procedure.)

Last August, Judge Winifred Smith of Alameda County Superior Court ruled that claims brought by 14 women were not expressly or impliedly pre-empted under federal or state law, and allowed the Essure litigation to progress. And in October, after hearing arguments presented by Fitzpatrick and co-counsel, Judge Smith ordered that all of California cases involving Essure be coordinated for pretrial purposes before her.

Legal advocates call this move a “major victory” for Essure victims and attorney Elizabeth Graham at BirthControlProblems.com said that, “This is a very favorable development for these injured women. I’m hoping that it’ll be a quicker, more efficient, cohesive resolution to all women’s cases in California.”

Approximately 50 lawsuits involving more than 800 women have been filed in California and hundreds more have been filed against Bayer in district and state courts nationwide.

According to Modern HealthCare, lawyers working on the coordinated California cases in the coming months will aim to draw together a schedule to reach trials and begin the process of discovery.  “We're going to be looking at issues of what Bayer knew about problems associated with the devices, when Bayer found out…[and] what they did with the information,” Fitzpatrick said.

Fitzpatrick is the third female attorney recently appointed to lead a mass tort. In December Attorney Leigh O’Dell of Beasley Allen in Alabama and Michelle Parfitt of Ashcraft & Gerel in Washington, D.C. were appointed as Co-Lead Counsels for consolidated MDL in New Jersey federal court concerning talcum powder and its link to ovarian cancer.

More ESSURE News
Since Essure was approved in November 2002 and until the end of December 2015, the FDA received almost 10,000 reports of problems related to Essure, including four adult deaths. It is relevant to specify “adult” because hundreds of fetal deaths have been linked to the device, according to Madris Tomes, founder and CEO of Device Events and former FDA employee .

Bayer officials insist there is no proof that Essure causes complications like chronic pain and autoimmune disorders. “These are so common to women,” Dr. Edio Zampaglione, Bayer’s vice president for United States medical affairs, recently told the New York Times. Hundreds of women who had a hysterectomy allegedly due to Essure complications may disagree. And so does Fidelma Fitzpatrick.