ReNu with MoistureLoc solution has been widely used for the storing, wetting and cleaning of soft contact lenses. But here once again, a drug company has left a product on the market, with no warning to consumers, long after it was aware that serious side effects were developing in people using the product. 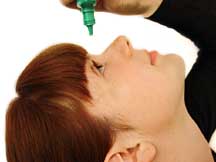 But this problem with ReNu surfaced long before February 2006. In July, 2005, an ophthalmologists at the Hong Kong Hospital Authority, while holding a periodic review, voiced concern over "an unusually high yield of Fusarium from patients' clinical specimens sent for culture," according to News Inferno on August 28, 2006.

In August 2005, the Hong Kong Health Department issued a public alert about a recent outbreak of 4 cases of keratitis, and on October 20, 2005, formally notified Bausch & Lomb of a potential link between the outbreak and ReNu with MoistureLoc, but Bausch & Lomb did not inform the FDA of this notification

On November 11, 2005, after receiving no response from Bausch & Lomb to the October 20, notice, News Inferno reports, Hong Kong health officials once again placed Bausch & Lomb on notice of a potential link between the outbreak of keratitis and ReNu with MoistureLoc. And once again, Bausch & Lomb did not inform the FDA of this notification.

In the US, on March 8, 2006, the Centers for Disease Control received a report from an ophthalmologist in New Jersey regarding three patients with contact lens-associated fusarium keratitis, during the preceding 3 months. Initial contact by the CDC with several corneal disease specialty centers in the US, revealed that other centers also had seen recent increases in fusarium keratitis.

When the company learned of the problem with the ReNu solution, at least as far back as October 20, 2006, when it was notified of the problem in Asia, Bausch & Lomb took no action to warn consumers or remove the product from the market in the US, until the FDA got involved.

On April 10, 2006, a "Dear Healthcare Practitioner" letter from the FDA went out to medical professionals stating:

"This is to inform you of a recent increase in the number of reports in the United States of a rare but serious fungal infection of the eye in soft contact lens wearers. The infection, a fungal keratitis caused by the Fusarium fungus, may cause vision loss requiring corneal transplants."

"Both the Food and Drug Administration (FDA)," the letter said, "and the Centers for Disease Control and Prevention (CDC) are investigating this situation."

"At this time," the FDA said, "Bausch and Lomb has agreed to stop shipping the ReNu MoistureLoc brand contact lens solution."

Baucsh & Lomb's Greenville, South Carolina plant has been linked to the outbreak. The Greenville plant produces all of the company's eye care solutions sold in North America and most of Asia, and reportedly had not been inspected by the FDA for 3 years prior to the outbreak. The last FDA inspection took place in March 2003 as a follow-up to citations given the plant in May and June of 2002.

On November 6, 2006, the Associated Press reported that Bausch & Lomb had received a warning letter from the FDA about an inspection of the Greenville plant. The inspection, it said, took place March 22 through May 15, 2006, in connection with reports that some users of ReNu with MoistureLoc solution got a rare eye infection.

In an MMWR Dispatch dated April 10, 2006, the CDC announced that it had received reports of 109 cases of suspected fungal keratitis from consumers in 17 different states. To determine the root of the problem, the CDC said, it was coordinating an investigation with public health authorities in California, Connecticut, Florida, Georgia, Iowa, Maryland, Massachusetts, Michigan, Missouri, New Jersey, New York, North Dakota, Ohio, Pennsylvania, Tennessee, Texas, and Vermont.

At that time, the CDC had complete data for 30 of the patients and determined that 28 of the 30 wore soft contact lenses. Preliminary information obtained by the CDC from patient interviews indicated that 26 of the patients reported using a Bausch & Lomb ReNu solution in the month prior to developing the infection. According to the CDC, 8 of the 26 patients required corneal transplantation.

On April 12, 2006, MSNBC announced that the Walgreen Co, the largest US drugstore chain, told its stores to pull all ReNu products from its shelves, and not just the MoistureLoc product that had come under fire, quoting a Walgreen spokesman.

Wal-mart and CVS drug stores followed suit and removed the product from their shelves before the public health advisory was issued.

It wasn't until on May 15, 2006, that the FDA announced the permanent removal of the product from the market. "Based on this scientific and epidemiological data suggesting that ReNu with MoistureLoc may increase susceptibility to Fusarium," the FDA said, "Bausch & Lomb has decided to permanently remove the ReNu with MoistureLoc product worldwide."

"ReNu with MoistureLoc contact lens solution, manufactured in the Greenville, SC plant," the FDA said in the statement, "was voluntarily withdrawn from the market in the United States on April 13, 2006."

In May 2006, the FDA also announced that Bausch & Lomb failed to promptly notify federal regulators about 35 cases of Fusarium keratitis that occurred in Singapore, and also did not properly notify the FDA that it had removed the MoistureLoc product from the Singapore and Hong Kong markets in February 2006.

On May 19, 2006, the CDC released an MMWR Dispatch, updating its on-going multistate investigation into fusarium keratitis occurring in contact lens wearers and said its findings continued to show an increased risk for fusarium keratitis linked to patients using ReNu with MoistureLoc in the month prior to the onset of infection.

As of May 18, 2006, the CDC said, it had received reports of 130 confirmed cases of fusarium keratitis infection, "defined as clinically consistent fungal keratitis with symptom onset after June 1, 2005, no history of recent ocular trauma, and a corneal culture yielding a Fusarium species."

By that date, the CDC advised that cases had been reported from 26 states and one territory and the median age of patients was 41 years, with a range of 12-83 years, and 85 of the 127 cases, or 67%, were female. As a result of the infection, the agency noted, corneal transplantation was required by 37 patients or in 31% of the cases.

On May 31, 2006, the FDA updated the Preliminary Public Health Notification of April 10, 2006, with new information on a recent increase in reports of fungal infection in soft contact lens wearers in the US. "The infection," the FDA warned, "a fungal keratitis caused by the Fusarium fungus, may cause vision loss requiring corneal transplants."

On August 23, 2006 experts at the CDC and leading eye care professionals, published a report in the Journal of the American Medical Association, concluding that Bausch & Lomb's ReNu With MoistureLoc was the only solution contributing to the outbreak of fusarium fungal infections.

The lead author of the report stated, "the most important message for contact lens wearers is to stop using MoistureLoc, and throw out any MoistureLoc solution purchased before the recall."

The report also put to rest the claim by Bausch & Lomb that a factor in the outbreak was a failure by consumers to properly clean their lenses and replace the storage solution regularly, as the report said there was little difference in the practices of the people infected and consumers who remained uninfected.

The report involved 164 confirmed cases of fusarium keratitis in the US, and of those patients, 55 needed corneal transplants to save their eyesight.

More News
Prior to the recall, the ReNu solution is estimated to have been used by 2.3 million contact lens users in the US. Because adverse reactions often go unreported, experts say, many more patients in the US have likely developed fusarium keratitis from the ReNu with MoistureLoc solution than the numbers indicated by public health agencies.

Worldwide, some 300 patients were diagnosed with the disease, according to the November 6, 2006 Houston Chronicle, and Bausch & Lomb is facing numerous lawsuits related to the outbreak.

The CDC advises clinicians evaluating contact lens wearers with signs or symptoms of keratitis, which include unusual redness of the eyes, eye pain, tearing, discharge, or light sensitivity, should consider fungal keratitis and refer the patient to an ophthalmologist if appropriate.

According to the CDC, first-line treatment includes topical and oral antifungal medications and patients who do not respond to medical treatment usually require surgical intervention, including corneal transplantation.

If you or anyone you know has contracted an eye infection or has had eye sight damage by using ReNu with MoistureLoc contact lens solution, please contact a [ReNu Eye Contact Solution] lawyer who will evaluate your claim at no charge.
Request Legal Help Now