According to documents filed on August 8, 2017 (case 1:115-cu-00) filed in a Brownsville, Texas court Tristar Products Inc. and Ninfa Vasquez and Jose Vasquez have “reached a settlement of all the issues pending in this lawsuit”. No details were made public. 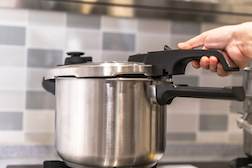 According to the statement of claim on July 3, 2014 Ninfa and Jose Vasquez purchased “Power Cooker” 6-quart digital pressure cooker from a Tristar Products TV advertisement.

The Tristar electric pressure cooker is advertised as an efficient cooking method that helps food maintain vitamins and freshness.

Mrs. Vasquez used the cooker for the first time on August 2, 2014 following all instructions enclosed with the cooker. She was preparing pinto beans for the family dinner. Two hours after unplugging the cooker the lid “suddenly and without warning” blew off.

The steaming hot contents of the pressure cooker burst out of the pot and came into contact with Mrs. Vasquez’s chest, abdomen and pelvic area causing her to be severely burned.

Ninfa and Jose Vasquez were represented by attorney Daniel P. Barton in a personal injury and product liability lawsuit. Barton has extensive experience representing individuals who have been severely burned. Barton obtained a record setting verdict for a man burned in a chemical plant in 2012.

“Anytime you have super-heated condensed steam there is no other worse burn than that – not a dry burn, not a cold burn. A wet burn gets into all your nooks and crannies and crevices of your skin. Nothing is worse,” says Barton from the Barton Law Firm in Houston, Texas.


According to the statement of claim, the Vasquez suit alleges Tristar failed in its duty “to use reasonable care in developing, designing, manufacturing, selling and/or marketing a product free from defects in material or workmanship”. It also alleges that the company failed “to adequately warn consumers of the dangers inherent in its product that is the subject of this suit.”

“We have looked at other similar incidents and what we found out is that this is happening all over the United States and there have been dozens and dozens of complaints. Some people are just sitting in their living room watching TV and hear a big pop and when they go into the kitchen there’s a water spill and a mess, but other people have been burned.”

Barton’s firm has about a dozen clients currently who also allege to have been seriously injured by pressure cookers that blow up. The firm is investigating those complaints as personal injury cases.

“We are marching forward,” says Barton. “Tristar is the consistent call we get from consumers about pressure cookers.”

Posted by
David Boyd
on January 21, 2018
corer blow stream off
Posted by
Karen gebhard
on January 9, 2018
Yes this happened to me as well Jan 6th 2016...: most painful thing I’ve ever experienced
Posted by
ruth taylor
on September 17, 2017
yes this crock pot exploded on me an caused very serious damage to my chest.