Sometimes progress isn't a good thing. Take portable gasoline cans, for example. In the old days, gas cans used to have a vent, that would allow vapors to escape from the can, avoiding a buildup of pressure in the container (often the case if a container is stored in a warm environment, like a tool shed not shielded from the sun…) 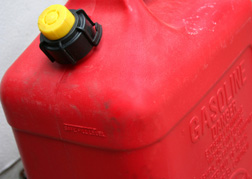 Vents had a tendency to allow for unanticipated spillage as well. Thus, many states have required portable gasoline can manufacturers to design spill-proof containers. In other words, containers without the capacity to vent vapor buildup.

This fact struck a California blogger last year the hard way, when she used a portable gasoline can to fill a portable generator. Not realizing that pressure had built up in the non-spillable container, she engaged the button, which would release the fuel, only to find that her act served to release trapped pressure all at once, rather than gradually. The sudden venting of gasoline vapors also brought with it liquid gasoline, which saturated the user's clothes and hair. Gasoline spritzed into her eyes as well.

The generator she was intending to fill was switched off, but had been running and was hot. Luckily, there was no spark…

Her home state of California had passed strict laws governing the gas can industry.

Then there is the issue of the flame arrester—a small, wire mesh device at the base of the nozzle that allows the unimpeded flow of liquid, but can prevent the escape of vapors that can ignite in the presence of a spark.

Four members of a Youngstown family were severely burned when a gasoline can used to help fuel a bonfire exploded. The blast occurred when someone attempted to pour gas on the open flame.

The four were rushed to the hospital with critical injuries.

It is not known if the gas can used during the incident was equipped with a flame arrester. Vapors escaping from an opened gas can—especially a can with the contents under pressure—can ignite when in the presence of an open flame or anything capable of generating a spark. The flame arrester can help prevent such an event from occurring, by harnessing flammable vapors inside the can.

It has been reported that most consumer-grade gas cans are manufactured without a flame arrester. Combined with the new-generation, non-spillable containers that no longer have the venting capabilities of older cans, the level of risk to the consumer increases in kind.

If you or a loved one have suffered losses in this case, please click the link below and your complaint will be sent to a personal injury lawyer who may evaluate your personal injury claim at no cost or obligation.
Request Legal Help Now

Posted by
Joelr
on June 17, 2016
My can was pressurized and when I tried filling the mower, same thing happened to me. Eyes, mouth, face, just completely soaked with gasoline. Make sure to release the pressure before you hit the button. My eyes hurt horrible. I hope it didn't cause any permanent damage
Posted by
Nayr
on May 7, 2015
Learned this first hand last night while filling my lawnmower from a 5 gallon can about half full of gas left over from last winter's snow-blowing. The can was under so much pressure and blew the gas into the mower with such force that the gas sprayed straight back at me and soaked me! Even after this incident I had to twice open the spout (in a more controlled fashion, obviously) to release the remaining pressure!