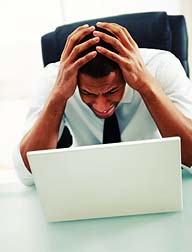 In June, 2009 the Financial Industry Regulatory Authority (FINRA) issued a regulatory warning regarding leveraged and inverse ETFs. Regulatory notice 09-31 states: "Inverse and leveraged ETFs typically are not suitable for retail investors who plan to hold them for more than one trading session, particularly in volatile markets."

Some retail customers say they lost money because they did not know the risks associated with holding on to an ETF for longer than one day, and were not warned that the funds' results could deviate from their benchmark over time.

A lawsuit filed against ProShare Advisors alleges that the registration statements, prospectus and statements of additional information regarding ProShares UltraShort Real Estate fund were "false and misleading."

According to an article published 08/07/09 in the online edition of the Wall Street Journal, the fund was sold as a simple directional play, seeking daily results that corresponded to twice the opposite of the daily performance of the Dow Jones US Real Estate Index. However, the lawsuit alleges that when the index fell 39 percent, the fund fell 48 percent.

ProShares responded in a statement that the lawsuit is without merit and the company will defend against it.

However, leveraged ETFs are designed to achieve their objectives on a daily basis, not on a long-term basis, as with other funds. This means that such funds can deviate significantly from their objectives when held for longer than a day.

If you have suffered losses in this case, please send your complaint to a lawyer who will review your possible [Exchange Traded Funds (ETF) Lawsuit] at no cost or obligation.
Request Legal Help Now