As careful as you are to mitigate germs in the kitchen to ward against salmonella, you might be forgiven for becoming angered when despite your best efforts, the salmonella that could make you and your family sick could be coming from your tap water. That's the case in the city of Alamosa, Colorado after an outbreak of salmonella poisoning has been allegedly traced to the municipal water supply.

Reports of salmonella contamination in Alamosa have been escalating for several days, and that number reached 216 yesterday. Sixty-eight cases have been confirmed, and nine people remain in hospital. 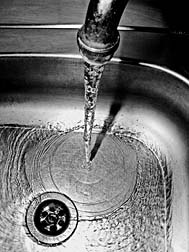 It was Wednesday of last week when tests revealed some kind of unidentified organic compound believed to be salmonella was found in the municipal water supply. Definitive tests can take anywhere from seven to 10 days to complete, so it may be a few weeks before the contaminant is conformed as salmonella.

However, Alamosa municipal officials are not waiting for the final test results to come in. Effective Tuesday morning at 9am, the city's fifty miles of pipe will be flushed with a high concentration of chlorine.

While municipal officials are confident that the chlorine flush will get rid of whatever nasty is in the system, it has yet to be conclusively determined if the organism is, indeed, salmonella, and just how it got into the municipal water supply in the first place.

The water debacle is having a huge affect on the community—those that are lucky enough to so far have their health. Students of Adams State College may be barred from the campus for a few days while the flush is taking place, and the issue forced Alamosa officials to declare a state of emergency last week.

Beyond the inconvenience, lies the source of the contamination, and the entry point. Could this be a continuing hazard?

One needs only to recall the Walkerton tragedy that unfolded in the small Canadian town in 2000. The municipal water supply was contaminated with the highly dangerous O157:H7 strain of E. coli bacteria, from farm runoff into an adjacent well that was known for years to be vulnerable to contamination. Seven people died and more than 2500 became ill from E. coli contamination, resulting primarily from lax testing and supervision by those charged with the responsibility of the municipal water supply.

More News
While no one is suggesting for a second that municipal water officials with the Alamosa utility are guilty of anything remotely similar to the Walkerton tragedy, the fact remains that a municipal water supply is the fastest way to sicken an entire population.

While Alamosa municipal authorities continue to battle with the water supply in an effort to clean it up, and allow it to once again achieve safe levels, all eyes will be on the Colorado city as it determines the source of the salmonella—where it came from, and how it got in there.

Beyond the cost to human health and possibly human life, the costs stemming from such contamination can be horrendous. It has been estimated that the Walkerton water tragedy in Canada cost a minimum of $64.5 million, to a maximum of $155 million to cover the costs associated with system and process upgrades, and lawsuits.

The costs to a family, can be incalculable.