Is Radioactive Fish Cause for Concern?

In January, officials announced that the Vermont Yankee nuclear plant leaked tritium and other radioactive substances into the Connecticut River and this month, officials revealed that strontium-90, a very dangerous isotope that is linked to bone cancer and leukemia, was found in the soil. It may also be in the river. It is yet to be determined whether this leak is an environmental concern. 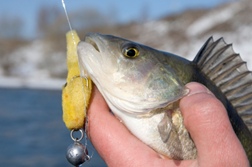 A yellow perch recently caught four miles upstream from the reactor tested positive for radioactive strontium-90 (Sr-90), but state officials haven't determined that the contamination came from Vermont Yankee. Tritium was found in its monitoring wells at levels 100 times the federal Environmental Protection Agency's (EPA) safety limit for that substance in drinking water, which is reason enough for concern, yet state health officials say there is no cause for alarm and people do not need to limit their fish consumption—even though strontium and other radioactive substances can collect in their tissue.

The International Agency for Research on Cancer has determined that radioactive strontium is a human carcinogen, but the US Centers for Disease Control and Prevention that tracks toxic substances says exposures must be at high levels before the risk of cancer is elevated. John Till, president of South Carolina-based Risk Assessment Corp. and a consultant for more than three decades in testing for radioactive substances in the environment, said that strontium-90 is present in fish caught around the world and the amounts are too tiny for concern.

Strontium-90 is a "bone seeker" similar to calcium in that it tends to accumulate in the bones of humans and animals when it is introduced into the body. Although 70-80 percent is excreted, most of the remaining strontium-90 is deposited in bones and bone marrow with one percent deposited in blood and soft tissues.

The EPA has set limits on the amount of Sr-90 (and other radionuclides) that may be released to the air, and has set limits on the amount that may be present in public drinking water. The accident at the Chernobyl nuclear power plant caused a large amount of Sr-90 to be deposited in the Soviet Republics and some was dispersed as fallout over Northern Europe and worldwide. According to the Agency for Toxic Substances and Disease Registry, Sr-90 didn't make its way to the US, so where did it come from?

More Environment News
William Irwin, radiological health chief for the state of Vermont, said 59 picocuries per kilogram were found in the perch's bones and that it was impossible to establish a baseline for strontium-90 in Connecticut River fish, because the state had not tested for it before this year, and for that reason it can't be determined for certain whether Vermont Yankee has been adding strontium-90 to the river. But if it didn't come from the nuclear plant, where else could it come from? Another official said that strontium-90 is more likely due to atmospheric nuclear weapons testing in the 1950s and 1960s and the Chernobyl disaster in 1986.

The owners of the Vernon reactor have been accused of misleading state regulators about underground piping at the plant, an action that led the Vermont Senate to block the plant from operating after its license expires in 2012.