US Government to Face Lawsuits over New Orleans Levee

The US government may face many lawsuits now that a US District Court Judge has ruled that the Army Corps of Engineers can be sued for negligence regarding flood damage caused by failure of the levees in New Orleans. 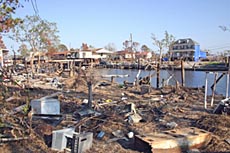 In handing down his decision, the judge said the flooding was foreseeable based on two important factors that the Army Corps knew about prior to Hurricane Katrina. The first was that there was destruction to the marshlands that surrounded the MRGO. The destruction of the marshlands intensified the storm surge resulting in the flooding of much of New Orleans. The second was the faulty design of the MRGO which led to an acceleration of the strength and force of the surge. According to the plaintiffs, if the MRGO had not been built the devastating flooding would not have occurred.

The judge also found that the court needed to review three major allegations made by the plaintiffs: (1) that the Corps did not consult with the U.S. Fish and Wildlife Service and the Louisiana Department of Wild Life and Fisheries regarding the MRGO's alignment; (2) that there were errors in constructing and maintaining the MRGO; and (3) whether there were decisions made that did not follow standard engineering practices.

A central question as to whether or not lawsuits against the Corps will be allowed involves the nature of the canals and levees. If the waterway in question was a flood control project, under the 1928 Flood Control Act, the Corps is free of liability. However, if it was a navigable waterway, the Corps could be found liable for the collapse of the walls. Therefore the courts must first determine whether or not a waterway is actually a flood control project before allowing a lawsuit to proceed.

The Army Corps of Engineers faces at least one lawsuit which claims that the organization knew before the hurricane that the flood walls of the 17th Street Canal levees were unstable. The suit, which is seeking class action status, alleges that the walls were weakened by dredging of the soil that supported the levees. If the lawsuit is granted class action status, thousands of residents could be included potentially costing the government billions of dollars.

Meanwhile, a group of New Orleans residents is asking Congress to set up an independent, bipartisan panel to investigate the failure of the levees during the Hurricane. So far investigators agree that part of the failure of the levees was due to weak soil and unstable designs. However it is not yet known how critical decisions in the design were made and whether or not the Corps ignored problems with the walls.

If you or a loved one has suffered physical or psychological injury or financial loss as a result of flood damage caused by Hurricane Katrina, please contact a [Levee] lawyer who will evaluate your claim at no charge.
Request Legal Help Now