Company "Left the Town for Dead"

The town of Blackwell, Oklahoma wants the owners of a defunct smelter operation to get the lead out--literally! Their kids are testing positive for high levels of lead and their homes are contaminated with traces of arsenic, cadmium, zinc and lead dust. It's an environmental nightmare and no wonder they called a lawyer. Attorney Keith Langston, from the firm of Nix, Patterson & Roach in Daingerfield, Texas has filed a class action suit on behalf of 4 residents of Blackwell, Oklahoma against Phelps Dodge and its parent company, the Freeport-McMoRan. 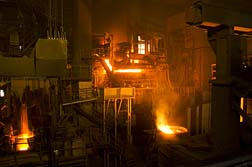 "Most of my clients still live in the town," says Langston. "They range from children to octogenarians, and they have very significant concerns about potential health problems and the affect the smelter has had on their lives."

And despite years of promises that the leftovers from the Phelps Dodge Freeport-McMoRan company smelter operation would be cleaned up, the town is still stuck with millions of pounds of toxic waste affecting everything from the ground water to their quality of life.

Legal Wrangling
Right now, the class action suit is mired in legal wrangling over where the case should be heard-- yet another delay in the community's long, protracted battle to get its town cleaned up after decades of being an Oklahoma environmental issue. The company wants the case moved out of the Western District of Oklahoma, but Langston says, "We think it is a local controversy and should be decided by local citizens in the county where the controversy occurred."

Allegedly FreePort-McMoRan Company 'Damaged' their Town
The complaint filed in Kay County, Oklahoma, by 4 plaintiffs from the town of Blackwell claim the operators of the smelter are financially liable for "creating, maintaining and trying to cover a nuisance that damaged the town and its people," and then "left the town for dead".

The suit contends that the company is guilty of "unfair enrichment" says Langston. "We believe that the defendants deposited and stored more than 58 million pounds of contaminated waste on my clients' property for decades."

They believe not enough effort has gone into cleaning up their town and want full property remediation and an ongoing medical monitoring program for the 7500 people who live in Blackwell.

Plant Made Wartime Materials
The smelter operation opened in 1916 during the First World War and operated in town for 54 years. It supplied material for lightning rods, windmills, water tanks, siding and roofing and many wartime materials. In the 1940s and1950s the plant added cadmium that produced products for paints, television and ceramics. By the mid 1960s, the smelter employed 1000 people and was one of the largest smelter operations in the US.

More Environmental News
Jobs or no jobs, not everyone was happy to have a zinc smelter in town. By the 1970s, local area farmers were complaining about breathing problems and unhealthy, damaged crops. The farmers sued the smelter plant owners and although they received compensation, the company did nothing to reduce emissions or cleanup the site. Two years later, the plant shut down for good.

'Not Guilty' says Freeport-McMoRan
Freeport-McMoRan says any damage to the environment was done by previous owners and since they did not own the plant at the time of the alleged toxic waste issue, it has no responsibility.

That is not however, how the people of Blackwell, Oklahoma and their attorney Keith Langston see it. "They inherited the liability," says Langston. The suit asks for punitive and compensatory damages. "This case is just at the beginning stages, we have a long way to go."

Keith Langston is a graduate of the University of Texas at Austin (B.S 1996) and the Baylor University Law School (J.D. 2001).