The Federal Emergency Management Agency (FEMA) and the Centers for Disease Control and Prevention (CDC) announced that testing for formaldehyde levels in trailers and mobile homes will begin Friday, December 21, 2007. Testing will take place in Mississippi and Louisiana.

The testing comes in response to growing concerns about the FEMA trailers indoor air quality and health concerns raised by their occupants and community members.
An estimated 150,000 FEMA trailers were distributed in Mississippi, Louisiana, Florida, Alabama and Texas to provide temporary housing for residents made homeless following hurricanes in 2005.

The CDC will take air samples of 500 occupied trailers. Models to be tested include travel trailers, modified travel trailers (park models) and mobile homes. Testing will take approximately five weeks, and a report of the findings will be published in early 2008. 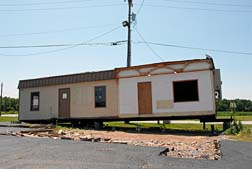 Formaldehyde is a colorless, strong-smelling gas, often found in particle board, glues and adhesives in the cabinetry, bunk beds and bench seats of camper trailers. Formaldehyde is listed as a carcinogen by the U.S. government and exposure at high levels over a prolonged period of time may cause cancer. Additional adverse effects with long-term exposure to formaldehyde can include headache, depression, fatigue, and impairment of memory.

For many trailer occupants this action is long overdue, and the tests are seen as yet another stalling tactic by FEMA. Cases of residents becoming sick from the air inside the trailers were reported by FEMA's own field workers, as early as 2006. Complaints included reports of watery eyes, burning sensations of the eyes, nose, and throat, coughing, wheezing, nausea, and skin rashes.

In response to concerns and inquiries related to potential FEMA employee exposure to formaldehyde, air monitoring was performed in FEMA new and refurbished trailers in March, 2006. The focus of the monitoring was to determine the worker exposure level of formaldehyde and to evaluate the work operations associated with the trailer staging operations. FEMA employees performing work activities involving the trailer staging operations included inspections, prep work and set-up for trailers prior to public receipt.

The air monitoring found no indications that FEMA employees had the potential to be exposed above the Occupational Safety and Health Administration (OSHA) permissible exposure level while performing job activities involving trailer staging operations. The formaldehyde levels found in the trailers were reported to be comparable to the levels posted on the Environmental Protection Agency (EPA) website for typical levels found from building materials off-gassing in trailers and/or manufactured homes. FEMA employees assigned to trailers staging operations were directed to receive formaldehyde and hazard communication training, in accordance with OSHA guidelines.

The Sierra Club, which has been credited by some for being the first group to document the toxicity of FEMA trailers, decided to conduct their own air quality tests. According to the February 15, 2007 press release by the Sierra club, (Mardi Gras Celebrations Overshadowed by Toxic Trailers), 83 percent of the trailers they tested in Mississippi, Louisiana and Alabama had levels of formaldehyde above the recommended limit of 0.10 ppm. Tests conducted jointly by the Sierra Club and Texas Wildlife and Parks on FEMA trailers in Texas also showed high formaldehyde levels.

Accusing FEMA of continuing to deny the problem existed, Becky Gillette, co-chair of the Mississippi chapter of the Sierra Club stated "We know one family that moved into a storage shed because their daughter threw up every time she spent time in the FEMA trailer".

On March 28th, 2007 FEMA incorporated for their travel trailers the same standard required by the U.S. Department of Housing and Urban Development (HUD) for manufactured homes. The HUD standard places limits on formaldehyde emissions and product certification of all plywood and particleboard materials, which involves emission certification by a nationally recognized testing laboratory and a written quality control plan for each plant where particle board is produced or finished or where the plywood is finished. FEMA also stated that they would continue to study the issue to determine what other specific actions could be taken to protect the public.

In a July 24th statement, Carl Pope, Executive Director of the Sierra Club, called for FEMA to immediately stop distributing trailers and recommended that no more trailers be distributed or sold until FEMA completed its investigation into formaldehyde outgassing and could ensure that all of the trailers distributed were safe. He added, "It is reprehensible that FEMA plans to continue selling and distributing trailers with the knowledge that these trailers could have potentially toxic levels of formaldehyde. Despite mounting evidence that the problem is more prevalent and serious than originally thought, FEMA continues to give these toxic trailers to disaster victims and even to sell them to Native American tribes across the country".

On July 25, 2007, faced with a massive public outcry, and following the House Committee on Oversight and Government Reform (July, 2007), FEMA announced that it had decided to re-evaluate its decision to continue selling trailers known to have unsafe levels of formaldehyde.

The Federal Emergency Management Agency (FEMA), on September 5, 2007, finally issued an Emergency Lodging Assistance (ELA) guidance that allows assistance to occupants of FEMA-provided temporary housing units who ask to be moved because of health concerns associated with their units.

Currently, FEMA is working with the Departments of Housing and Urban Development, Veterans Affairs and others to provide sufficient housing for all residents seeking to move out of trailers and mobile homes.

In addition to the indoor air quality assessment, the CDC is also performing studies evaluating the health of children currently living in trailers and of children born while their families resided in FEMA trailers.