Living in the Shadow of the Power Plant

People residing near the Bruce Mansfield power plant in Beaver County, PA, have been living under a barrage of air contamination, and finally the plant owner is going to be taken to court, says PennFuture, an environmental public interest organization.

Lawsuit pending
In a May 22 press release, PennFuture says it will launch a "citizen" lawsuit against FirstEnergy for massive air pollution violations at its Bruce Mansfield plant. PennFuture says it has the support of a second environmental watchdog organization, the Environmental Integrity Project (EIP), in bringing the lawsuit. 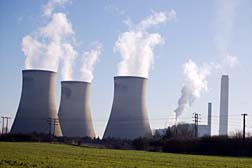 Not just in Pennsylvania
The concern can be seen across the country. At a Waterloo, Iowa, town hall meeting to deal with a power project application earlier this month, local residents packed the room. The meeting that lasted into the wee hours, and against the overwhelming opposition of residents packing the room, the city council voted to approve the annexation of 340 acres of land near the outskirts of town, and rezone it for the Elk Run Energy Station, a $1.3 billion, 750-megawatt coal-fired power plant.

Back to Harrisburg, PA, PennFuture reports on the long standing complaints of plant pollution by local residents. Here's what some of them have to say:

The release states that FirstEnergy's own records show the plant released harmful and illegal air pollution at least 257 times between November 22, 2002, and March 29, 2007. On July 22, 2006, residents within a five-mile radius of the plant were deluged with "black rain", which damaged homes, automobiles, crops, livestock and other vegetation and structures. Penn State University officials warned residents not to sell, butcher or eat livestock that had been exposed to the black rain, and farmers were instructed to throw away any crops or honey that had been exposed.

PennFuture (its full name is Citizen's for Pennsylvania's Future), is a state-wide public interest organization concerned with policies to improve the state's environment and economy. The EAP is a non-profit organization dedicated to stronger enforcement of federal and state anti-pollution laws,

If you have noticed a violation of an environmental law, please contact a [Environment Law] lawyer who will evaluate your claim at no charge.
Request Legal Help Now