Fly Ash the Latest Win for the Billy Murphy Firm.

The Murphy Firm has a long and distinguished list of achievements in the history of the American legal system and the $45 million settlement it just negotiated on behalf the small community in Maryland represents yet another milestone. The settlement still needs to be certified, but the 250 people of Gambrills have every reason to believe their community will be compensated for the damage fly ash from a nearby Coal Fired Plant did to the local water supply. "This is a highly unregulated problem and you find it where electricity is generated by coal combustion," says attorney Hassan Murphy, a third generation member of the Murphy Firm. 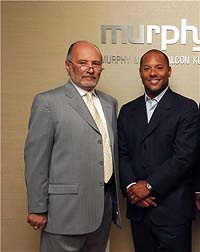 Coal Ash
Coal fired plants no longer spew fly ash into the air. Instead, magnets inside the plant collect the coal ash and then dump it into designated disposal pits.

Starting in 1995, the Constellation plant in Anne Arundel County, with the permission of the Maryland Department of the Environment, began dumping coal ash into nearby sand and gravel pits. "This is why our case was so compelling," says Hassan Murphy. "This ash was dumped into former sand and gravel quarries, which you can imagine are very porous."

The Maryland department of the Environment was hoping that filling the pits with
coal ash would allow the site to be rehabilitated for future development, but that's not how things worked out.

By 2007, monitoring wells showed high levels of metal contamination and the nearby town of Gambrills discovered that their well water was no longer fit to use.
Constellation was ordered to pay a $1 million fine. But the people of Gambrills received no compensation. "We thought that was inadequate and that's when we approached the people in the community," says Hassan Murphy.

The Murphy Firm challenged Constellation Power Generation (a subsidiary of Constellation Energy) to step up and 'do the right thing' for the community. Constellation agreed to make good on the problems and the $45 million negotiated settlement will be used to connect the 84 homes affected with a new public water supply. It will also go towards making improvements to the neighborhood and compensating property owners.

In addition, Constellation will cease future deliveries of new coal ash to the quarry.

"The safest way to handle and dispose of Coal Ash is in clay lined pits and you need a 5 foot clay liner to inhibit the travelling of the metals through the water when it rains etc.," says attorney Murphy. "Clay is as impermeable a substance as you can get."

According to Hassan Murphy, there may be other communities across the US where coal ash from coal-fired electricity plants has affected water supplies. "There could be more fly ash class action suits," says Hassan Murphy. "Where there is ground water contamination from fly ash there should be a viable cause of action."

More Environmental News
Hassan Murphy comes from a distinguished family of lawyers. His grandfather was the second African-American to graduate from the Maryland School of Law and later became a judge. Hassan Murphy is a partner in the firm with his father Billy Murphy. The Murphy family also published one of the very first African-American newspapers in the US.

The firm has an impressive list of multi-million dollar verdicts against some of the country's biggest and best-known corporations including Ernst and Young, First Union Bank, the Baltimore Police Department and others. "I think what sets us apart is that we actually try cases, and people know we will go to trial," says Hassan Murphy. "We have a tremendous group of trial lawyers and thinkers here and we have had some tremendous results."

Hassan Murphy holds a B.A. in political science from Williams College (1990) and a J.D. from Georgetown University Law Centre (1994). He became the managing partner in The Murphy Firm in 1999. The firms also handles medical malpractice, major torts and mass torts involving pharmaceutical companies.