Attorney Katherine Kimpel is definitely on top of this file and seems to have a river of information flowing through her brain. Just days ago she filed a class action suit on behalf of a single father from the Capitol Hill neighborhood of Washington D.C. alleging that lead in the city's water supply caused his two adopted sons to have serious and permanent health problems, i.e.,lead poisoning. 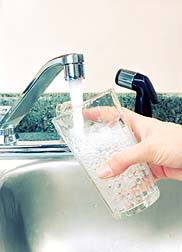 In 2001, John Parkhurst adopted two 8-month-old boys from Vietnam. One of their early checkups revealed both boys had extraordinary high levels of lead in their blood. In fact, their levels were so high the readings were reported to the Centre for Disease Control in Atlanta.

Parkhurst's sons are small for their age. Both Jonathan and Joshua have struggled in school and show signs of attention deficit disorder and Jonathan in particular has serious neurological and anxiety problems. Parkhurst spends up to $40,000 yearly on occupational therapy and medication for the boys.

"It wasn't until the report by The Children's National Medical Center and Virginia Tech that Parkhurst made the connection between lead contaminated water and the problems that his sons were having," says attorney Kimpel.

Between 2001 and 2002 The Washington D.C. Water and Sewer Authority (WASA) was aware of were high levels of lead in the water supply serving several D.C. neighborhoods, including Capital Hill where the Parkhursts lived.

Revealing the lead contamination would have forced WASA to begin a public information campaign warning D.C. residents about the potentially harmful effects and begin a costly process to clean up the water. "They didn't do that," says Kimpel. "Instead they hid water samples from the EPA and for a year, between 2001 and 2002 allowed people in the District, including children who are the most vulnerable to lead poisoning, to continue to consume water it knew was dangerous."

"When WASA finally had to confirm there was lead contamination in the system it downplayed the potential for harm by altering mandated public information messages and mailing out recipes for cranberry tea to its customers," says Kimpel.

All during that time, Parkhurst was feeding his new infant sons formula made with tap water. He now believes, according to the suit filed, that lead in the D.C. water supply did serious damage to his sons.

Before she became a lawyer, Kimpel was a schoolteacher. "As a former teacher," she says, "I was shocked when I saw how small the boys are for their age."

More News
"We know from this recent report that the number of children in the Washington D.C. area showing lead contamination skyrocketed during this period," says Kimpel. "We don't know how large the class will be, but the lead contamination was very widespread and it will be in the thousands of people."

John Parkhurst is a psychologist and has been able to keep up with medical expenses for his sons but many other families are not so fortunate. According to Kimpel, the most significant part of the suit is the pursuit of a $200 million fund to help children harmed by lead in the D.C. water supply.

"We would also expect there will be punitive damages." Kimpel adds.