LAWSUITS NEWS & LEGAL INFORMATION
Home Page >> News Articles >> FDA Solidly on the Fence with Regard to ..

FDA Solidly on the Fence with Regard to Troubled Endoscope Reprocessor

It is turning into a saga worthy of reality TV: the on-again, off-again relationship between the US Food and Drug Administration (FDA), and Custom Ultrasonics Inc. (Custom) over the manufacturer’s System 83 Plus automated endoscope cleaning systems. Many an Endoscope lawsuit has alleged that infection has been passed from one patient to another due to lack of success in completely eradicating bacteria and previous infection from reusable endoscopes. 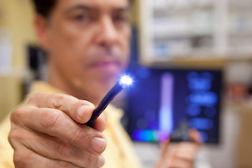 The latest position of the US health regulator is reflected in a recently-released recommendation by the FDA for health care facilities to stop using the System 83 Plus for cleaning, or ‘reprocessing’ duodenoscopes. Apparently flexible endoscopes are okay, as they are not as intricate as duodenoscopes, devices which are extremely hard to clean and disinfect adequately. Numerous plaintiffs have filed an endoscopic infection lawsuit over infections allegedly delivered through duodenoscopes not sufficiently disinfected.

According to various sources, Custom actually pulled the trigger on an urgent medical device recall this past May for the System 83 Plus automated washer with regard, specifically, for use relative to duodenoscopes.

The FDA, in its latest communication, appears to agree with the manufacturer’s stance by issuing its own recommendation against using the System 83 Plus for duodenoscopes.

This latest foray into the System 83 Plus automated Washer - and other issues relating to the manufacturer over the years - speaks to a tumultuous and somewhat inconsistent position the FDA has taken with the manufacturer dating back to 1991.

The result has been ample fodder for anyone filing a medical malpractice lawsuit.

As we have previously reported, the FDA is on record as finding various violations with regard to good manufacturing practices and the timely reporting of issues potentially affecting patient safety over the past 25 years. Violations have been denoted in 1992, 1995, 2005 and 2006.

As an example, a surgical infection lawsuit brought against Custom by federal prosecutors in Philadelphia in 2006 noted a time lag of two years between the time at which the defendant learned of infections stemming from its System 83 Plus Washer in 2004, and the point at which the manufacturer alerted the FDA in 2006.

Such issues relative to patient safety are supposed to be filed with the regulator - by law - within 30 days.

But here begins the see-saw approach by the FDA…

In 2007 a consent decree - which did not require Custom to admit to any wrongdoing - barred Custom from manufacturing and marketing the troubled System 83 Plus. Soon thereafter, when Custom was found to be in compliance, the FDA backed off and allowed Custom to resume limited operations.

That lasted five years. In 2012 the FDA mandated a recall of the troubled System 83 Plus over various violations of the consent decree and other compliance violations. A further inspection found that Custom had failed to validate several aspects of the troubled System 83 Plus system - including compatibility with disinfectants, water filtration, and ensuring that it fully cleans duodenoscopes.

Custom wanted to simply ‘fix’ the machines. The FDA said that wasn’t an option and wanted them gone. “FDA orders Custom Ultrasonics to immediately recall all System 83 Plus devices by removing them from use,” a communication from the FDA to Custom noted, according to a Bloomberg News report carried in the Sunday Telegram (Massachusetts 05/29/16).

That was this past January. Soon after, the FDA backed off that stance, indicating it was working with Custom to validate the machines. “In the 20 years that I’ve been in the business, I’ve never seen a recall get changed like that,” said Mark Duro, director of sterile processing operations at New England Baptist Hospital in Boston, in comments to Bloomberg.

More ENDOSCOPE INFECTION News
Then, in May - with more fodder for an endoscope negligence lawsuit - Custom issued its recall of the System 83 Plus for cleaning duodenoscopes. The manufacturer issued stickers to be physically affixed to the machines, reminding technicians not to use the automated systems for duodenoscopes. Only flexible endoscopes are deemed appropriate for use with the troubled automated washer.

On August 17 - just a little under a month ago - the FDA issued a safety communication of its own entitled ‘FDA Recommends Health Care Facilities Stop Using Custom Ultrasonics’ System 83 Plus Automated Endoscope Reprocessors (AERs) for Reprocessing Duodenoscopes; These Reprocessors Remain Available to Reprocess Other Flexible Endoscopes.’

In other words, it’s fine by them.

Anyone contemplating a surgical infection lawsuit will be buoyed by such fodder.

Click to learn more about LawyersandSettlements.com
LawyersandSettlements.com - A trusted, independent legal news provider bringing quality news and information on all legal cases and lawsuits filed in United States of America to its readers since 2002. Over 250,000 legal help requests including Drugs & Medical Cases, Defective Product Cases, and Malpractice Cases have been forwarded to lawyers all across to the country.