After a four week trial, a 12-person jury returned a total verdict of $63,915,000.00 in Los Angeles Superior Court finding that PrirvatAir Inc. had unlawfully discriminated against Captain Doyle Baker in using his age as a motivating factor in his termination. The jury also found that PrivatAir Inc. and the flight crew had defamed and intentionally inflicted severe emotional distress upon Captain Baker.

The suit, filed last year by the then 63 year old Captain Doyle D. Baker, alleged that he was terminated in violation of the California Fair Housing and Employment Act, when the management company Willis and Moore had retained to manage their Gulfstream II aircraft terminated Captain Baker using his age as a motivating factor. The suit also alleged that PrivatAir Inc., two other pilots and the flight attendant had conspired with PrivatAir Inc. to defame and inflict severe emotional distress upon Captain Baker. 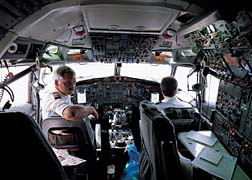 The jury verdict, rendered in the Downtown Los Angeles Courtroom of the Honorable Judge Joseph Kalin, awarded Captain Baker compensation for back pay, future loss of earnings, pain and suffering and emotional distress in the total amount of $53,885,000.00, and then reached an additional award of punitive damage of $15,015 against PrivatAir and three of its employees.

"This verdict should remind all employers that refusing to treat older employees fairly can be very costly," said Michael L. Kelly, the lawyer who represented Captain Baker at trial. "This company was more concerned with the image they project to their wealthy clientele than giving their employees a fair deal."

During the trial, evidence was presented that Captain Baker, a highly decorated veteran of 242 combat missions, and pilot with a perfect military and civilian flight record, was terminated by PrivatAir Inc. after the flight attendant serving on the aircraft sent a letter to Willis, Moore, and PrivatAir Inc. accusing Captain Baker of serious safety violations and painting a picture of Captain Baker suffering from mental problems, feeble minded and too old to continue to fly. The flight attendant later admitted that he did not write the letter, but that the other two pilots did. Evidence was presented during the trial, in support of Captain Baker's allegation of a conspiracy among the flight crew, assisted by PrivatAir Inc., to replace Captain Baker with a younger pilot, a personal friend of one of the other pilots.

Mr. Michael L. Kelly is a partner with Kirtland & Packard LLP, a full service law firm with offices in Los Angeles (El Segundo) and San Francisco. The firm handles a variety of complex litigation matters. The firm and Mr. Kelly can be contacted through [www.KirtlandPackard.com]

If you or a loved one have suffered losses in this case, please click the link below and your complaint will be sent to a employment lawyer who may evaluate your claim at no cost or obligation.
Request Legal Help Now

Posted by
anon
on March 15, 2012
Captain Baker is also notable for being the first of a mere three Marine pilots to shoot down an enemy jet in Vietnam.