Larry Mungiello was the oldest working courier at FedEx and one of the longest employed. He gave the company 19 years of loyalty, commitment and hard work. Too bad the company wasn't loyal in return. 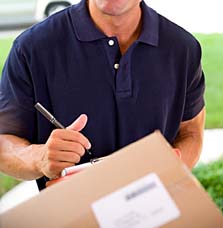 Mungiello was terminated from his job in August 2005 without even a thank-you. He definitely was not getting the gold watch. He believes that FedEx wanted him out to make way for younger couriers and that they knew Mungiello had no intention of leaving, at least not for a few more years. "I'm 65 now and in excellent shape and there was no reason for me to retire," says Mungiello. As well, he married later in life and has young kids to support; his pension would barely pay the bills.

According to Mungiello, management tried over a period of five years to wear him down. They wanted Mungiello to quit; that way they wouldn't have to pay his pension. "They were verbally abusive in front of other couriers, always cracking jokes about my age," he said. "They would say stuff like 'Hey Larry, you aren't just losing your hearing, you're also losing your mind' or 'getting slow, get geritol' and other digs about by age."

"And they would also set me up for failure. If they told me to do something one way, I would do it and afterward they would say it was the wrong way. For example, we were told to always fill the gas tank at the end of our shift. Certain deliveries had to be really early and some of the young couriers wouldn't fill up from the night before so I always filled it the next day. 'Here comes Larry, late again,' management would say, and they would write me up, but I was told to fill the gas tank.

One time it backfired on them. A manager thought I hadn't filled the gas tank and started giving me hell for it but he had checked someone else's truck. Even after reprimanding me in public for something I hadn't done wrong, he still wouldn't apologize."

In 1996 Mungiello called the president of HR at head office in Memphis. "I told him that I was the subject of age discrimination and harassment and he referred me to the Eastern Director -- he 'would check it out.' As you can imagine, nothing happened. I just let it go, thinking that I would be fired if I pursued it further."

But the abuse never let up. "They knew I was one of the best couriers in the company; I was number one with 'Bravo Zulu' -- an award you receive from FedEx customer service. In the 19 years that I worked here, I never had one customer complaint. In fact many customers sent letters expressing their concern when my route was changed -- they wanted me back."

Not only was his route changed, Mungiello's time schedule changed too -- some days he only worked a three-hour shift. He was made a 'floater.' "After 19 years of work, this was a slap in the face," he said. At the same time, he was set up with impossible tasks, and subsequently "written up" in yet another report.

By this time he was having anxiety attacks and his blood pressure was way too high. The latest straw came in 2005. Management falsified his work sheets and suspended him. Five days later, Mungiello returned to work and he was escorted out of the building -- terminated. Apparently he had a dossier of grievances against him.

Fortunately, Mungiello kept documents since 1992, proving defamation of character. In one document, he went on vacation and came back to find that a younger courier had taken his place. "They called me lazy because this guy could do so much more than me but I talked to this same courier later and found out that his chart was falsified -- it was a physical impossibility..."

"One courier I worked with said to me, 'Why don't you just let it go?' That is what FedEx wanted. But I wanted to fight.

I put in a grievance with HR of my FedEx station against age discrimination. There are three stages of the grievance committee:

1st stage: Management said they would look into it and get back to me. After some time, they did get back to me and said they found some things wrong, reprimanded those involved and the case was closed. But I wanted to know why I had grievances against me for 10 years.

2nd stage: I had to go in front of several managers and FedEx HR, who happened to conveniently work next door to the person in charge of the grievance. There was nobody on my side. This time my case got thrown out the door even faster than the first time -- case against age discrimination closed. I didn't even get a chance to talk or show my proof of innocence.

3rd stage: Three months later I was still waiting for a final letter. Eventually I called and they said I was supposed to reply to their letter within five days or the case was closed. What letter?

Now I have no other recourse but to seek legal help. Six years ago I heard about a law suit against FedEx regarding age discrimination but I was afraid to get involved, thinking I would lose my job. But recently one of my co-workers phoned and told me there was a new case against FedEx regarding age discrimination. I gave the law firm a call and now I am definitely part of this lawsuit.

If you have suffered from age discrimination as a Federal Express courier, please contact a [Fedex Age Discrimination Lawyer] who will evaluate your claim at no charge or obligation.
Request Legal Help Now

Posted by
Bill
on December 21, 2014
I feel your pain Larry. Hopefully you had a good outcome. My name is Bill and I work for the Fed Ex contractors here in North Carlolina. Yes, I said Fed Ex "contractors". There are some drivers who do work for Fed Ex direct However, ever since this "contractor" deal strarted, there have been many contractors who have come and gone. Come and gone because they either couldn't keep good people, not afford to keep their vehicles to be up dated, extremely dangerous and crappy working conditions, and because of most of all, not paying their employees the overtime they had worked, not paying their employees the legal paid "holidays" they deserved, not giving their employees any benefits, and giving their employees at least 100 to 130 stops a day within an (8) hour legal day. Also, not to mention that if you are sick, or have called in sick you would "not" be paid for those days because they some how feel the fact that because you didn't work that day, they had to find someone else to pay to take your route that/those day(s)?? Sometimes the drivers had asked the contractors why don't they pay their drivers these days and their responses are generally.."We don't pay these things because Fed Ex doesn't pay us enough". Now what I heard through the grapevine of a couple of people who had known a contractor who recently "sold" all of his vehicles to another "new" contractor who has taken over that he had made a killing. Just curious.....does this sound legally possible and just?? I guess it's a way to put more liability on the contractor than it is to keep Fed Ex legally responsible. I think it is amazingly unbelieveable that us as drivers can go deliver ground and home packages with the Fed Ex trucks and vans, the listen to people tell us the drivers.. "Oh wow! You work for Fed EX? Great company to work for with all of the overtime, benefits and paid time off that you are getting huh?" I tell them now nothing but the truth now instead of hiding the fact that "No...not really. It's a sh*tty company to work for because the contractor system they are using abuses the drivers. sorry to be such a downer everyone. Happy Holidays!
Posted by
The mob
on May 22, 2014
Can not believe how they are treating a female employee who finally couldn't take the sexual harrassment anymore on the job. She report it and now she is being treated even worse.
Posted by
E.Trevino
on November 18, 2010
Fedex is a terrible co. they will overcharge customers if no weight is marked on pkg. Example If a pkg, weighs 3 lbs mark 3lbs, a courier can put it as 6 lbs.