During our interviews with Laura Ho and Shannon Liss-Riordan, Terry Chapko's name came up as one of the attorneys who brought the burgeoning Starbucks class action to their attention. LawyersandSettlements caught up with him in his one-person shop in this suburb of San Diego where he's practiced employment law on the plaintiff's side since 2004. 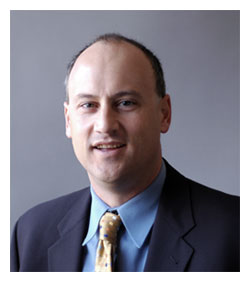 LAS: What prompted you to move to the plaintiff side?

TJC: I had three young children and wanted to spend more time with them. That was one big impetus. My current practice gives me the time and flexibility to do that. I'm now a sole practitioner. Initially this was a three-person firm, then my partner decided to move to Nevada and pursue other interests, so I've been on my own since then.

LAS: How did the Starbucks class action get started?

TJC: Well, the reality is that the case came to my former partner John English, so I give him the initial credit. John had been talking to a couple of Starbucks employees about their tip pooling practices. One of them, Jou Chou, was more aware of issues concerning tip pooling because his parents had operated a Chinese restaurant, so he was more attuned to who should and shouldn't be getting tips. He became the class representative or named plaintiff.

John filed the initial lawsuit; he had Googled Shannon Liss-Riordan in Massachusetts and contacted her for a draft of a model of a complaint and received some very useful input from her. After the case began, I was largely responsible for drafting the opposition papers when Starbucks asked for summary dismissal. I also filed the motion for class certification.

After John left, I went from a small firm to a sole practitioner and sort of inherited the case shortly after he filed in October 2004.

LAS: Did you have any idea then how big this case would be?

TJC: Not even close! We knew there were a lot of Starbucks stores, but we had no idea of just how many stores or class members there were in California. I do only employment law, but I am not really a class action attorney. I have some class action matters, but nothing this size. Of course, there are not many cases this big, anyway!

We got the class certification in April 2006. We'd conducted extensive discovery with many thousands of documents before we filed the motion. We'd gotten information on whether the tip pooling practice that our client experienced was a company-wide practice throughout California, and we learned that it was actually a nationwide practice.

Starbucks has a very centralized approach, so for every Starbucks store in California and nationwide, to become certified, a shift supervisor has to complete this training program. That meant that every shift supervisor had these duties, not just our client's.

I think when we got the numbers for the class member list and realized how many people were involved we realized just how big this was. That's when we got help from the other firms, because it had already taken a lot of time, and it wasn't like I was being paid along the way. We needed more resources because depositions were being taken in Seattle and Milwaukee and things like that. They were designated co-lead counsels, and I continued to be part of the case, since I'd been involved from the beginning and I'm the only one on the team from San Diego.

The case came to trial in San Diego State Superior Court on February 15. The first phase went from February 15 to 22, to establish liability, then resumed on March 12. It was a fairly straightforward caseï¿½ either the shift supervisors are employer's agents and can't participate in the tips pool or they're not, and the judge had already ruled on that when she denied summary judgement for Starbucks.

Starbucks had also filed for a writ of mandate with the state appellate court in 2006 and 2008 and had been denied and with the California Supreme Court in 2006, which was also denied. In that sense, the issues had been thoroughly litigated by the time we got to trial.

LAS: What did Starbucks seek in a writ of mandate?

TJC: It's kind of like an emergency request; they want the court to step in and say this is wrong and because of the possible repercussions, the lower court should reverse its decision. They wanted the class decertified and the case thrown out on the merits; they made those arguments repeatedly, and they lost. Off the top of my head, I'm not aware of any other case when so many writs were filed before trial.

LAS: Did Starbucks ever show any willingness to settle, or did they seem determined to take it to trial?

TJC: We did go to mediation with Starbucks; we went up to San Francisco and mediated for a day and never received an offer from them. We never received a settlement offer at any time before, during, or after trial. They have fought it every step of the way.

It's a huge verdict and it's a huge class, but the underlying issue I do believe is fairly straightforward. We had clear precedents and a clear statute. I've worked on the defense side, and people I know who work the defense side all said to a person that they don't advise their clients to include supervisors in a tip pool. In fact, I've done the same myself in the past.

LAS: Where do things stand now?

TJC: We're filing post-trial motions. We'll be bringing motions for attorney's fees and motions to cover our costs and for proposed distribution of the funds to the class. It's a lot of people. There are actually court-appointed companies that distribute these funds. We have some contact information for the class members, but most of the information goes to these people.

LAS: Say a barista worked for Starbucks for three years. How much would they receive?

TJC: Someone who worked there for three years at 25 hours a week, 50 weeks a year, would get somewhere around a couple thousand dollars. You really need statistical experts here. If you get $1.71 per hour in tips and you're working 25 hours a week, it's in the thousands. Now, one woman who testified worked for Starbucks in Los Angeles for nine years, and was getting paid $9.85 an hour. She may receive up to $10,000, so for her it's huge. A check with all those zeroes after the numberï¿½that's not bad!

Terry J. Chapko, sole proprietor of The Law Office of Terry J. Chapko, has practiced employment law in California since 1995. He has extensive experience handling discrimination, harassment, wrongful termination, and wage and hour issues. He has represented employees exclusively since 2004 in individual and class-action cases against some of the largest employers in the United States and San Diego County, including Starbucks, SAIC, and Vons-Safeway. A 1988 graduate of Grinnell College, Iowa, he received a JD from the Northwestern University School of Law in 1995.