Because Kell had been diagnosed with diverticulitis, a common digestive disease that could become serious, his stomach pain warranted a trip to the ER at Swedish Medical Center. It did not warrant $10,000, most of which amounted to emergency room overcharges. 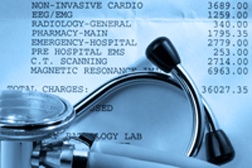 Dave first went to urgent care at a nearby “boutique” clinic. The doctor said he was probably OK but advised that he go to the ER just to be on the safe side. “I called my health insurance company because I was out of town and they recommended the Swedish Medical Center,” says Dave.

Of course Dave assumed he would be covered for any treatment his insurer recommended so he went to Swedish Medical in Ballard, where he was immediately admitted. “They hooked me up to an IV for hydration, then I had a CAT Scan and two kinds of antibiotics,” Dave says. The scan revealed nothing untoward, and two hours after he was admitted, Dave was released with a few prescriptions.

Two weeks later, Dave received a bill from the medical center for almost $10,000. The insurance portion totaled $6,000 and Dave was expected to pay the balance, which didn’t even include the physician’s invoice, just the ER facility. In total, Dave was on the hook for $3,700.

“I called Swedish for an itemized bill,” Dave explains. “The raw costs were nothing short of outrageous: the CAT Scan was $5,800 just for the machine, without a doctor’s interpretation. But here is the kicker - one antibiotic pill cost $230! I had a prescription for the same pill that cost $10 for 50 so this one pill had a markup of 23,000 percent. I could have just waited for my prescription instead of taking the pill at the hospital and that would have saved me $230. I had no idea.”

Dave says he was charged $560 for only one dose of another antibiotic, $400 for saline solution and a third med was a relative bargain for only $35. Although these drugs are covered under his insurance plan, the pharmacy charges alone were more than he thought he would have to pay for the entire experience.

“I called Aetna, my insurer, and complained - why send me to ER care at Swedish?” questions Dave. “I certainly had a bone to pick with them; their recommendation had cost me thousands of dollars. I have no idea what my insurer paid - in my opinion, they didn’t pay anything; I think some insurance companies are in collusion with the hospitals.”

What did Dave take away from this experience, what does he advise individuals to do if they - unavoidably - wind up at a hospital’s emergency room?

More EMERGENCY ROOM CHARGES News
“I would advise people to be born in Canada.” says Dave, laughing. “Joking aside, I am so disappointed with both the Democrat and Republican party, especially the Republicans. These hospital overcharges are a travesty: people are dying and going broke while executives in charge of operations are making millions. My takeaway advice is this: Don’t get sick in the US.

“I think the medical decision to have a CAT Scan was a good call because if I had a blockage, I would have needed surgery ASAP. And I am lucky that I could afford to drop $3,700, but what if this scenario happens to someone working for minimum wage? These charges would constitute 1/3 of their yearly salary; no wonder so many people wind up bankrupt and homeless.”

Dave says that the US has 700,000 medical bankruptcies a year, making it unique in the world. You can’t help but wonder how many of those stemmed from ER overcharges. “Every other democracy worldwide solved this problem long ago but we cannot yet figure it out. Who can afford to drop $10,000 for a stomachache?”