No medical insurance? If it’s not a life-threatening situation, you may want to reconsider treatment at a hospital’s emergency room. Carlos could have saved thousands of dollars if he was treated by a veterinarian. Instead he is dealing with outrageous emergency room overcharges. 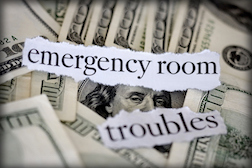 Well, sort-of kidding about the veterinarian, but not really. “I was bitten by a bat and was told to go to the emergency room,” says Carlos. “I went to Richmond Community Hospital but never saw a doctor. I was given Human Rabies Immune Globulin, a rabies shot and a Benadryl shot and charged $44,151.44.” Carlos says the globulin shot alone was $33,000. He was uninsured.

Even giving the hospital the benefit of doubt, it leaves more than $10,000 for an ER visit, rabies shot and Benadryl. A rabies shot by a veterinarian costs about $30. A human rabies shot, if you’re covered by insurance, can cost about $400. And a shot of Benadryl at shopmedvet.com, an online medical and veterinary supply company, will set you back $1.25.

ER overcharges could drive you batty!

Dana (not her real name) in Nashville regrets going to ER last year for a stomach problem. “My insurance policy doesn’t tell us where or where not to go so my husband drove me to the closest hospital,” says Dana. “Although I was just complaining of a stomach ache they ran heart tests and some other things. I’m very healthy and a runner and there is nothing wrong with my heart. They couldn’t find anything wrong and sent me home. A few days later we got a bill for $4,000—I couldn’t believe it.”

More EMERGENCY ROOM CHARGES News
Dana’s heart likely skipped a few beats when she opened that letter. Although she is insured, she was on the hook for half the costs. “We have been emotionally drained because they keep sending bills,” she says. “My husband is retired and I only work part-time so there is no way we can pay this outrageous bill. We need help!”

The unpaid hospital bill is now in the hands of a collection agency, and they keep calling. Attorney Barry Kramer can help uninsured people by negotiating ER overcharges, and even if it’s gone to collection, he may “cut it down 50 percent or so”. But Kramer can get better results once he files an action. “In many instances the hospital has simply waived its entire bill to avoid a costly defense,” says Kramer.