A few days after Tomer’s son spent about two hours in ER with a broken arm he received a bill in the mail that included a charge for the emergency room alone. “How can the hospital charge $2,200 for this room—that’s the price of a 7-star hotel,” says Tomer. And being uninsured, that’s not all he was charged… 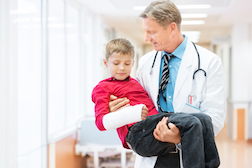 “We were at a wedding out-of-town where my son fell off a playhouse and broke his arm,” says Tomer. “I rushed him to the nearest hospital and they did a CT Scan—without asking—along with a few x-rays. The doctor put a splint on, gave us a few pain meds and we were sent home. We couldn’t have been there more than two hours.”

The ER doctor told them to come back in a few days after the swelling goes down for a follow-up and to put a cast on. Tomer said thanks but no thanks, they would go to their local hospital. His 2-year-old son fell about four feet. Luckily it was a clean break so why the CT Scan? That isn’t the only question.

Here’s the tricky part. Just before Tomer left he was handed a bill for $1,100 but if paid within 30 days it would only be $890. Tomer figured on getting some kind of a discount because his son wasn’t insured. And they knew he wasn’t returning. A few days later he received a letter from the hospital—this time the bill was over $5,000.00!

Tomer says there was no explanation, just a list of charges as follows:


“I immediately phoned and asked for a detailed bill,” Tomer says. “How could the doctor charge $1,027 for putting on the splint? He was in the ER room with my son for about three minutes. As for the x-ray and CT Scan charges, I had an x-ray of my lung taken last week and charged $60. This was outrageous.”

Wait, it doesn’t end there. Three days ago Tomer received another bill for $217.00, this time from Rome Radiology Group (Rome is the county where the hospital is located) with a mailing address in Indiana. Was this some kind of scam?

Back on the phone to hospital administration, Tomer was told that he could get a 20 percent discount if he paid the full amount now. “She told me that I could get a discount if I send them my bank statement from both chequing and saving accounts, and how much my house and car is worth,” explains Tomer. “Why would I give them that information? Apparently if I make money I am screwed—I have to pay the full amount.”

More EMERGENCY ROOM CHARGES News
Not all hospitals are created equally. At his local hospital, Tomer’s son was fitted with a cast that included a Disney sign, and had two x-rays to make sure the splint was placed correctly. The 3-hour visit totalled $300, down from $500 because Tomer was uninsured.
“I paid the bill right then and there. They were honest and more than fair,” he says.

“Some hospitals have no established rates for those who are uninsured,” says attorney Barry Kramer, whose firm focuses solely on hospital overcharges. “They have one-sided interpretations of their contracts and almost never give those contracts to patients, yet patients sign those contracts. I advise people to get an agreement from the hospital first, if at all possible.”