Kenny was prepared to pay emergency room overcharges to get a splinter of glass removed from his foot but he wasn’t expecting a $2,000 emergency room bill for a five-minute procedure. 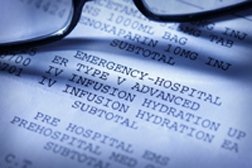 “My wife Diane and I knew about high emergency room charges so we estimated it would cost about $1,000 at the most but this bill is outrageous,” says Kenny, age 58. “Diane couldn’t get the piece of glass out because it was in too deep and the VA only pays for life-threatening emergencies so I had no choice.” Kenny is a 100 percent disabled veteran.

“I was replacing a window at home and a piece broke - I was just wearing socks,” Kenny explains. “I walked into the emergency room on tiptoe; it wasn’t going to come out by itself. The ER doctor sat me on a table, gave me a shot to numb the area and dug the glass sliver out with something like a razor blade. He gave me a tetanus shot and put a band-aid on it, no stitches required, and I went home. It took five minutes at the most.”

Before Kenny was treated, he signed an authorization form, allowing the hospital to treat him. He didn’t sign anything regarding charges or payments. About a month later Kenny received the emergency room invoice to the tune of $1,942.00. He couldn’t figure out how they arrived at this figure because the bill wasn’t itemized.

After several phone calls to the hospital, Diane found out that the invoice came from Schumacher Group, which bills itself as “a health care staffing company for physician careers and hospital management solutions.”


“We actually received two invoices - the first one totaled $1,300 and they can’t explain this amount - only the $600 doctor’s fee,” says Diane.
“The second bill from the hospital charged us $300 for the ER room and $600 for equipment. So I guess that means the razor blade and the two injections came to $600.”

And why did Schumacher Group bill an extra $700? It charged the $600 doctor’s fee but it appears that nothing else was paid by this company that purportedly puts the patient first. On its website the medical group says that “Our team consists of motivated, personable, highly qualified people interested in putting the patient first. And because we’re a privately held, physician-driven company, we’re committed to doing the right thing for the patients, physicians and hospitals we serve.”

More EMERGENCY ROOM CHARGES News
Not according to Kenny and Diane. “I spoke to someone at this company and he said, ‘I can send you a statement but you probably won’t understand it.’ I told him that I am a registered nurse,” says Diane. “We have no problem paying $1,000 for a piece of glass but this floors me. So we are now paying this billing company $25 per month to keep them from ruining our credit. Even if we had thousands of dollars in the bank, they won’t get another dime unless they can explain these charges.”

Kenny and Diane have been talking with Attorney Barry Kramer, who will likely get to the bottom of these emergency room overcharges and save the couple from ruining their good credit rating.

Posted by
Kat
on February 4, 2016
My son was charged $4246.00 for removal of a splinter on his foot by a podiatrist. It was a simple splinter he scraped off with the top of a the scalpel , no numbing, nothing, less than 5 minutes. He was there for the last follow up and discharge for a foot fracture. Clearly the dr. wasn't looking to discharge him without a final surprise. Apparently this is normal because the insurance company thinks this is acceptable!! The insurance paid over $1000 and we paid about $80 out of pocket. I am shocked and not even sure who to turn to. It is fleecing!! If I had known I would never said go ahead and remove it. NEVER. I would have done it on my own at home.
Posted by
Ursula St. Eloi
on August 25, 2015
Well what gets me is that HE SAYS that he's a 100% Vet. Why did you go to an ER outside of the VA? I'm 100% and when I'm in the states, I go to the VA for everything. They don't turn you away. NOW I live overseas, with NO VA available. But I wait until I visit the states and go to the doctor AT THE VA, emergency or not.
Posted by
Dave
on August 24, 2015
We were charged $1000.00 for a Q-Tip by CHOC Mission Hospitial to take out dry blood from our daughters nose after she got a bloddy nose. She was under 2 at that time and was standing on a bar stool and it fell over and hit her nose. We were advised by her pedritician to go the ER since it was after hours. By the time we got to the ER the bleeding nose stopped and the blood dried up.
Posted by
Richard Vickerman
on August 23, 2015
This; in the Rear with the Gear Vietnam Vet cannot take care of a little splinter? My Hero! NOT!
Posted by
James Szud
on August 23, 2015
Please list the name and address of the following ( so I know where not to go or see ):
HOSPITAL
DR. NAME
MEDICAL GROUP NAME
WHO YOU SPOKE WITH AT THE MEDICAL GROUP

These AO must think they can screw everyone because they claim to be....PROFESSIONAL ???