The CEO of a Florida hospital recently admitted that the main source of funding for hospitals, without taxes, comes from overcharging commercially insured patients. And two months ago another hospital’s CEO announced an eight percent increase in emergency room overcharges, which will “largely impact patients with private health insurance, not Medi-Cal or Medicare beneficiaries.” 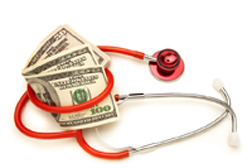 CEO Russ Armistead, University of Florida Jacksonville Healthcare, told WJCT News (June 2, 2105) that hospital funding in Florida is critical and that the Affordable Care Act and Medicaid expansion won’t lower healthcare costs for insured patients. Instead these programs shift the costs to cover uninsured patients from the hospitals to the insurance companies. “When people don’t have health insurance, [an emergency room] is the only option they have except for some of the free clinics we have around the city,” Armistead told First Coast Connect, a weekly call-in program in Jacksonville. He has proposed that the City of Jacksonville help fund UF Health through an independent tax district.

Meanwhile, CEO Zareh Sarrafian, Riverside County Regional Medical Center, said emergency room rates will be raised in accordance with “market” rates, because some of their rates are “below-market.” But what are the market rates? According to City News Service (April 7, 2015), Riverside County CEO Jay Orr said that adjustments are needed to rate structures because hospital costs to “buy drugs, medical supplies and contract out to a vast number of doctors” have increased.

More EMERGENCY ROOM CHARGES News
John (not his real name) says he went to the ER with severe abdominal pain. He sat in the waiting room for three hours before he was given a bed. “I had a CT Scan and was diagnosed with gastroenteritis, given a prescription and sent on my way,” says John. “I was on that bed for less than an hour. I received the ER bill a few months later for $18,000. Fortunately, my co-pay was minimal. But what about people who don’t have health insurance? No wonder so many people wind up bankrupt.”

John checked out rates for CT Scans at other hospitals in Florida. He says there is “no rhyme or reason” to the discrepancy in charges. Rates varied as much as $5,000. Attorney Barry Kramer confirms that Emergency Room charges vary from one hospital to another. He advises that you do some research into rates. But who plans for an emergency room visit? However, you can negotiate and dispute ER overcharges.

If you have been overcharged or you have paid way more than was justified by the amount of treatment received, Kramer says an attorney can seek reimbursement of the excess payments on your behalf. And hospital overcharging generally happens with uninsured patients. Sounds like everyone is getting overcharged...