Emergency Room Overcharges Start with Getting There

A California federal judge last month heard how former top-level hospital administrators were fired for refusing a kickback scheme that involved ambulance services connected to emergency room overcharges billed to Medicare, Medi-Cal and other government agencies. The original lawsuit claims the executives at Palo Verde Health Care District were retaliated against for reporting hospital overbilling to federal and state authorities. 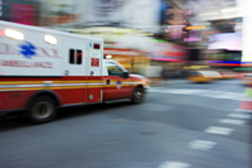 Ljubisa Kostic, attorney for former CFO Dennis Rutherford and CEO Peter Klune, told U.S. District Judge John A. Kronstadt that Rutherford was called into a meeting run by corrupt board members and asked whether he would “play ball” with them and end an investigation into potential overcharges to Medicare and the state government. He refused and was terminated a few days later, according to Law360.

Either patients didn’t need ambulatory services or transport came too late. Klune and Rutherford started to receive complaints from emergency room doctors about their patients’ transfers being unnecessarily delayed. The two executives discovered the scheme whereby a surgeon at the hospital wouldn’t transfer a patient until Desert Air Ambulance Inc. or the related Desert Critical Care Inc. was available. According to the lawsuit, the ambulance services are owned by a nurse who later became a board member at the hospital. The surgeon in question is also on the board. Klune and Rutherford reported their suspicions to the US attorney and other government officials and allege they were fired due to retaliation. The case is Dennis Rutherford v. Palo Verde Health Care District et al., case number 5:13-cv-01247, in the U.S. District Court for the Central District of California.

In a separate incident, Eric (not his real name) slipped and fell on a street corner and a kind samaritan called an ambulance, in this case too soon. The ambulance, which is owned by the local fire department, arrived and told Eric, age 67, that he would be taken to the emergency room. “I was sitting on the curb and told the paramedics that I wasn’t hurt that badly and I could call my wife to pick me up,” says Eric. “They told me that I could sign a waiver and then I could call my wife but the waiver never materialized.”

Instead, Eric says he was driven to the emergency room against his will and that the only treatment he received from the paramedics was a cold compress on his forehead and they checked his pulse. The ride took about 10 minutes, to the tune of almost $2,000.

More EMERGENCY ROOM CHARGES News
Eric’s insurance covered most of the cost but another bill arrived for $500. Being pro-active, Eric called the ambulance service and his insurance company. He had been overcharged $500 only because he was insured.

Back to the overbilling and retaliation lawsuit that has all the trappings of a B movie. The hospital’s attorney, Maria C. Roberts of Sweeney Greene & Roberts LLP, said plaintiffs Klune and Rutherford were running the hospital into bankruptcy. Board members voted to fire them because Klune billed the public hospital more than $500,000 in 2012 and Rutherford billed $300,000. According to the lawsuit, the CEO and CFO “also arranged a payment plan with the state of California for Medi-Cal overpayments that squeezed some of the last drops out of the hospital’s coffers.” Stay tuned…