After Jonathan crashed his motorbike on a northern California racetrack, he was ambulanced to a nearby hospital where x-rays showed he had a broken clavicle. After his return home to Canada, emergency room charges soon followed. 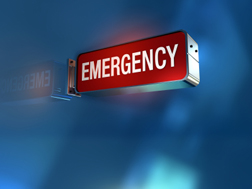 “I knew something was wrong with my shoulder and I slipped in and out of consciousness for about 10 minutes. Apparently I told the paramedics that I’m from Canada, that I hate needles and that I’m a vegetarian about 50 times,” Jonathan says, laughing. “They were super cautious because I might have a head injury so I was transferred to Enloe Medial Center in Chico that dealt with bone and head injuries.”

Jonathan spent six hours in the ER, two hours of which he has forgotten about. After the usual tests - checking his pulse and looking for any signs of nerve damage - and three x-rays, he was given a sling to wear around his shoulder, a prescription for painkillers and sent on his way.

“I don’t remember signing anything and I didn’t have any identification with me - it was back at the racetrack,” Jonathan explains. “Everyone was so friendly and talk about trust!” They took Jonathan’s word for who he was and where he lives. Maybe they called the racetrack; nevertheless, he says it was a good experience, despite the painful shoulder. Until the bills rolled in.

“I just had to wear the sling for six weeks and I was good to go, but the doctor emphasized that I check in with my doctor when I get home,” says Jonathan. “Several days later I had an x-ray at my local clinic and the orthopedic surgeon said I needed surgery right away.”

Jonathan did ask if he needed surgery at the Enloe ER and he offered to pay a few thousand dollars. “Because the bone was sticking out I wondered how it would heal without surgery, but in hindsight, I think they were concerned about whether or not I could pay. I got my medical reports later that said ‘Advise patient to go home and seek medical advice.’ I don’t know if they ever asked whether or not I had medical insurance.”

The orthopedic surgeon in Canada told Jonathan that his shoulder would take several months to heal, which is normal for the kind of break he sustained. Not normal, at least for Canadians, were the emergency room costs.


“The first hospital bill I received came to $39,276. After that I got billed $170 for a second doctor’s opinion and a few more emergency room fees for between $200 and $300,” Jonathan says.
“Oddly, I was charged $83 for three x-rays, which is considerably less than the cost of one x-ray here. It didn’t make any sense. I was also charged $800 for on-site care: the private paramedic company at the racetrack took me to their little medical trailer. That charge was totally unexpected because the track pays their wages. Double dipping? And there was the ambulance bill.”

Jonathan’s first reaction was that there was a mistake. How could they charge almost $40,000 for a six-hour ER visit that was really four hours because they forgot about him for two hours? He was shocked but not worried - thank god Jonathan pays an annual travelers insurance policy.

More EMERGENCY ROOM CHARGES News
“I forwarded the bills to my insurance company and after filling out lots of paperwork, my insurer paid everything,” Jonathan adds. “No matter now nice they were at the clinic, this bill is ridiculous. I am mostly angry. What if the next guy doesn’t have travelers insurance? It is obvious that hospitals don’t expect you to pay this much, partly because it is so expensive. And it is negotiable. I found out that my insurance company paid out only $6,500 for the big bill! All the lesser bills were paid in full.

An insurance policy analyst I spoke with told me that emergency room costs are like hotel rack rates. Realistically, nobody pays the rack rate, so they are obviously trying to take advantage and hope someone is naive enough, rich enough or willing to sell their house. But you certainly don’t expect an 80 percent discount.

I guess they count on a sucker being born every minute. I hope fellow Canadians know that they can dispute or negotiate the ER bill. And don’t leave home, especially to the US, without extra medical insurance.”

Posted by
robert rodemich
on May 3, 2015
its a joke but we can thank the insurance and government for the high prices , it makes sense for the hospitals and doctors to charge such stupid prices , because they no the more often then not the bill is getting paid by insurance or government most normal people could never afford the amount of money they want , is sad but its getting worse its all about money money money and how to rob someone from there money , i crashed a motorcycle some years back and broke my collar bone as well and what they do is tell you it can heal the way it is and always have that bump there and discomfort or have surgery and put a plate in it , i had insurance and that was a no brainier the surgery was almost 30k for a few hours, so how many with no insurance just get to live in pain for the rest of there life because its so over inflated . as i get older i see things differently and you realize the the crooks are not on a street corner they are the ones who make the rules and don't live by them , i hope my kids never look a government people ceo's of company's and many more as roll models because they are the real crooks and the guy on the street corner is just a bad guy , i could go on but this guy is right its a scam and it hurts evering one not just Americans