Steve thought he had a pinched nerve in his neck and was getting chiropractic treatment but when one side of his face went numb, Steve figured he should go to the emergency room—just to make sure he wasn't having a "mini-stroke." He was OK, but the Emergency Room overcharges almost gave him a stroke! 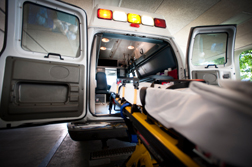 Although Steve, age 49, is in good shape, he had seen people who had strokes and didn't get help in time. So last November he went to the ER at Mission Hospital in Asheville. He had the usual tests, including one CAT Scan head/brain without contrast dye and cervical spine without contrast, and some blood work.

"I was in ER for no more than three hours when they sent me home," says Steve. "The doctor just said, 'You probably have a pinched nerve,' and take anti-inflammatory meds, such as Advil. They made an appointment with a neurologist which I cancelled (scheduled for next week). Since that time the pain has downgraded and I am almost positive it is stress-related. I'm working on stress management and seeing the chiropractor regularly. And I bought a cervical traction kit online for $25. And it works."

Steve's ER overcharges are likely contributing to his stress. "My wife saw this bill and went into shock, she was afraid to give it to me. When I saw it and after I peeled myself off the ceiling, I called Mission Hospital and said it was outrageous. Brenda, the nice administration person, said, 'If you can pay it all now, we will reduce it by 20 percent.' That surprised me and disappointed me too. It was a retarded statement to make. They know I am self-insured up to $5,000.

"'If I had the money to pay it now, I would,' I replied to Brenda. 'But I am calling because this is a major problem and I cannot pay it.' Brenda was nice, but I am sure she has to go through procedure a lot, and I wasn't about to argue with her on the phone. I thought my ER bill would cost $1,000 max.

Steve has the following three charges from that three-hour visit.

Bill #1. Mission Hospital total: $4,217.08
For room and nursing services, X-ray and imaging services, laboratory and other ancillary services (maybe the bandage? He had to use the washroom…).

Bill #2. Asheville Radiology $370
For the actual CAT Scan. Was he double-billed?

Bill #3. Carolina Mountain Emergency Medicine
For level 5 ER visit $412 and another $60 for interpreting the EKG.

More EMERGENCY ROOM CHARGES News
"I am so infuriated that I haven't paid anything besides a $150 deposit when I was at ER," says Steve. "I did some research. For instance, if I lived in India, the same CAT Scan would cost $90, with the same equipment. That information put me over the top.

"I also browsed online about my situation; I feel like I am being penalized because I am 49 years old, I work and I am able to pay my bills, or at least most of them. Maybe the hospital figures they can soak me to make up for the ones who don't pay. I am willing to make payments up to $1,000 and I would like an ER overcharges attorney to help me reduce the bill to a reasonable amount, as long as I don't owe the attorney $5,000!"