Going to a hospital or other emergency care center is stressful enough without having to worry about the financial costs associated with seeking such medical care. Being released from the hospital or care center can relieve one’s stress, until the hospital bills arrive and patients see the amount they’re told to pay for emergency room charges. These emergency room costs can add up to thousands of dollars for even a short visit, and worse, patients often are not warned about the costs prior to accepting medical help. 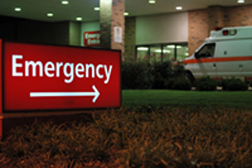 Making the situation more complicated is that uninsured patients often cannot find out prior to obtaining medical treatment how much they will be charged, and they generally are not given access to information about a hospital’s billing practices, so they may not realize they are being charged more for the same services. Ultimately, they are faced with either paying an exorbitant fee or having their bill go to collections.

More EMERGENCY ROOM CHARGES News
In Texas, the problem reportedly extends beyond hospital ERs and into stand-alone ERs, which despite being free-standing may still be owned by hospitals or hospital chains. According to The Dallas Morning News (11/15/14), these ER clinics may charge thousands of dollars for their services. One interview subject said they were charged $10,000 - including a $4,688 “facility fee” - for just five minutes with a doctor.

Even patients with insurance face high bills. One person interviewed for the article said his insurance company refused to pay for asthma treatment at a mini-ER, and he is now on the hook for $1,600. Patients may also learn too late that the ER center is “out-of-network” and therefore not covered.

Patients who have been to a hospital ER and received treatment while they were not insured may be eligible to file a lawsuit against the hospital, if their invoice does not show some form of special discount.

Posted by
Shalina Jones
on January 11, 2015
I'd just moved to Dallas in 2012 and had to go to the ER. I had no insurance. My medical insurance hadn't kicked in on my new job. I received an outlandish bill afterwards that did not indicate any discount.
This was at Los Colinas Medical Center ER.