When many mothers take an antidepressant such as Effexor during pregnancy, they do so believing the medication is safe. But when their child is born with heart problems, some might wonder if there is a chance that Effexor side effects have affected their child. Miriam S. says she took Effexor when she was pregnant with her son 10 years ago, but was only told by a doctor last year that her son's heart defects could have been caused by Effexor. 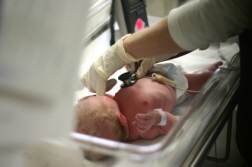 "I had some depression before and during the beginning of my pregnancy with Kyle," Miram says. "My Ob-Gyn prescribed the Effexor. I took it for a month or two while I was pregnant. Then we moved to California so I stopped taking it because I had no Ob-Gyn there to prescribe the Effexor, and I was doing better.

"Kyle was born a few weeks late and he was big. At three days old we took him to the doctor for a regular newborn baby visit and while we were there, the doctor told us to get him to the hospital right away. While Kyle was in the ER, he turned blue. There's a valve that newborns have, it was closing but it was keeping him alive. So doctors kept it open.

More EFFEXOR BIRTH DEFECTS News
"Then the next day, they did a cath procedure [cardiac catheterization] and he was diagnosed with mitral valve problems and aortic stenosis. Kyle had a valvuloplasty when he was four days old. He was in the hospital for a month after that. So after one month we were able to take him home. At four months doctors tried the valvuloplasty again because the valve was closing. That didn't work, so Kyle had his first open heart surgery at six months. In it, doctors did a Ross procedure, where they take the pulmonary valve and use it to replace the aortic valve, then put in an artificial pulmonary valve. They also did an aortic stitch. Since then, he's had a few procedures to check on how his heart looks. Last March he had another open heart surgery to replace the pulmonary valve because it is artificial and doesn't grow with him.

"Kyle is 10 now and his health is pretty good. He's doing pretty well after the last procedure. The biggest worry is that the mitral valve could get worse and if that happens, we're looking at a heart transplant, but that's not likely at this point. A heart transplant is scary. He gets tired faster that most kids his age. It was really bad before the last surgery but he knows how to self-limit. He sweats more and gets cold easily. Extremes in temperature are really bad for him. We're supposed to keep him from getting sick, but 10-year-olds get sick. When he gets a cold it's 10 times worse than when my other children get one.

"I was a young mother and the doctor prescribed Effexor. I listened to them, because I thought doctors know everything."