Terri Rimmer is a journalist and mother who has been trying to figure out for years what lay at the root of her daughter's eating disorder. She now believes that taking Effexor while she was pregnant with her daughter, now 10, is the culprit. Effexor side effects have been hotly debated with regard to pregnancy and the need for women to remain on antidepressants at the potential risk of harming their unborn child. 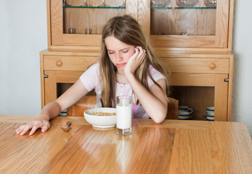 Rimmer wrote back in May that her daughter has a food aversion and has required a feeding tube since the age of two. Rimmer now laments that her use of Effexor venlafaxine while she was pregnant with her daughter might constitute the most likely cause.

"When I found out I was pregnant January 2, 2000, I immediately got off the Depakote and Effexor I was taking for fear it would affect my unborn child," Rimmer writes.

"My new gynecologist assured me it was right to get off the Depakote but that the Effexor wouldn't hurt the fetus and that in my extremely depressed state, that any benefits outweighed the risks.

"So I believed him.

"I didn't know that Wyeth, the drug company who makes Effexor, knew as far back as 1993, along with the Food and Drug Administration (FDA), that the medication had a 30 percent chance of causing respiratory and heart problems for newborns as well as feeding difficulties.

"But neither the pharmaceutical company nor the FDA bothered telling the doctors who were assuring pregnant women as recently as until 2006 that it was perfectly safe to take Effexor while expecting.

"Recently, before I found out this latest development, I was assured by a physician's assistant who had treated numerous kids with food aversion, that my daughter would outgrow this condition and that it was psychological."

That's when Rimmer jumped online for "the umpteenth time" and finally discovered that, in her view, Effexor was to blame for an Effexor side effect that "could have been prevented."

There have been various reports that suggest the risks of Effexor birth defects are not that much higher than the rate of birth defects in the general population—and that stopping a vital SSRI antidepressant could do more harm to the mother and, in turn, her unborn fetus. That said, there has been many a family filing an Effexor lawsuit as the result of a birth defect, however rare, allegedly stemming from Effexor use during pregnancy. Effexor is actually an SNRI (serotonin-norephinephrine reuptake inhibitor). Like other antidepressants, Effexor venlaxafine is used to treat major depression and other mood disorders, but differs from other SSRI antidepressants in that Effexor increases the levels of two neurotransmitters in the brain.
READ ABOUT EFFEXOR BIRTH DEFECTS LAWSUITS

Posted by
Terri rimmer
on July 27, 2016
my birth daughter will be 16 in August and still requires tube feedings although she has made some progress with food. she is 90 lbs.