Effexor Pregnancy is Like Playing Solomon for Patient's Doctor

If there were ever a recipe for medical malpractice, it is the conundrum that comes with prescribing antidepressants like Effexor to expectant mothers. Doctors have to play Solomon and either recommend continuation of Effexor and risk harm to the baby, or risk harm to the mother by stopping Effexor. 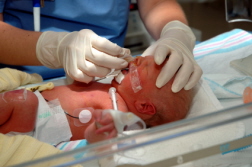 Various studies have concluded that the use of selective serotonin reuptake inhibitor (SSRI) antidepressants and tricyclics has a potential impact on the development of the fetus in the womb. A Canadian study has also raised concerns over the potential for miscarriage and spontaneous abortion.

The Canadian study, conducted by researchers at the University of Montreal, also looked at specific drugs and found that two in particular were associated with the greatest risk for miscarriage, including Effexor (venlafixine).

Various lawsuits have named as defendants both the manufacturer of Effexor and the prescribing doctors. Such lawsuits may spike, given that Effexor XR (extended release) is now available in generic form as of June 28. The US Food and Drug Administration (FDA) approved the marketing and distribution of generic Effexor by Teva Pharmaceuticals, the first out of the gate, with a six-month no-compete advantage for generic venlafaxine. Teva began shipments on July 1, days after the FDA approval.

Lawsuits concerning negative side effects of medication can run the gamut of physical and emotional adverse reactions. In most cases, fallout is limited to the direct health of the individual prescribed the potentially offensive medication.

More EFFEXOR BIRTH DEFECTS News
It's when SSRI antidepressants like Effexor are prescribed to expectant mothers that doctors face a real dilemma. Prescribing or continuing an SSRI antidepressant could have a serious physical and/or developmental impact on the child.

And yet stopping an antidepressant could have a serious emotional impact on the mother. In extreme cases, this could harm the developing fetus if the woman, no longer benefitting from the stabilizing effects of Effexor, decides to do herself physical injury. Studies have also shown that an expectant mother's emotional distress can harm her developing child.

Given the potential for crisis if the antidepressant is stopped versus the potential for fetal heart defects or other birth defects, a doctor can never be completely right. Approaching each individual patient as a separate case in a carefully studied approach that benefits from constant communication between the patient, her doctor and her family, is key to mitigating any risk.
READ ABOUT EFFEXOR BIRTH DEFECTS LAWSUITS