The full range of Effexor side effects on infants is not known, but some studies indicate a risk of permanent birth defects. Another reported side effect of prenatal exposure to Effexor is the potential for withdrawal. One study, published in Ned Tijdschr Geneeskd in 2003, observed a number of symptoms of withdrawal in newborns, including restlessness, hypertonia, jitteriness, irritability and poor feeding. 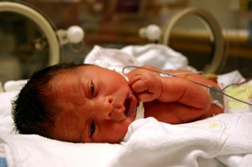 "The diagnosis was confirmed by a temporary improvement after administration of a low dose (1 mg) of venlafaxine [Effexor] to the boy," says the study (as translated into English). "Exposure to venlafaxine and other antidepressants which inhibit serotonin reuptake during the third trimester of pregnancy carries the risk of a neonatal withdrawal syndrome." Researchers noted that the withdrawal symptoms stopped around day eight.

More EFFEXOR BIRTH DEFECTS News
A different study, published in 2007 in the journal Pediatrics, found that exposure to Effexor led to a higher rate of behavioral signs, including issues with the central nervous, respiratory and digestive systems and hypoglycemia. These issues resolved themselves, but took almost four times as long to do so than in newborns not exposed to Effexor.

Effexor is an SNRI (serotonin-norepinephrine reuptake inhibitor). It is similar but not identical to a class of drugs known as SSRIs (selective serotonin reuptake inhibitors), which have been linked in some studies to birth defects, including congenital heart defects and persistent pulmonary hypertension of the newborn (PPHN).