Questions about Pristiq and Pregnancy, Potential Risk to Fetus

Similar to Effexor, Pristiq—an antidepressant manufactured by pharmaceutical giant Pfizer—is raising some red flags around the issue of birth defects. Pristiq, a serotonin-norepinephrine reuptake inhibitor (SNRI), has been found to have an impact in animal studies, but the side effects in humans are still relatively unknown. 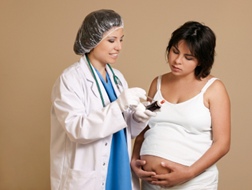 According to the 3/28/10 issue of eMedTV, animal studies showed that Pristiq increased the risk of low fetal weight, but did not appear to cause birth defects or miscarriages. However, without any available data on pregnant humans, the US Food and Drug Administration (FDA) has classified Pristiq as a "Category C" drug.

Here's what that means: the FDA admits to a lack of study data on the effects of Pristiq use in expectant mothers, but will allow healthcare providers to prescribe Pristiq to pregnant women, provided the caregiver believes the benefits to the woman outweigh any possible or potential risks to the unborn child.

The issue of antidepressant use in pregnant women is a hotly debated topic. While SNRIs and SSRIs (selective serotonin reuptake inhibitors) have been found to impact the fetus in certain circumstances, the doctor needs to determine if a patient might do harm to herself and, as a result, her unborn child, without the aid of an antidepressant.

In many cases there is less risk overall in keeping the mother emotionally healthy. By classifying the drug as a Category C, the FDA acknowledges the potential risk for complications to the unborn child, but allows the prescribing physician to make the final call.

More EFFEXOR BIRTH DEFECTS News
That said, there have been reports of unborn fetuses developing complications when their mothers use SSRIs or SNRIs during the third trimester, according to eMedTV. Those complications include:

Infants who are exposed to SNRIs or SSRIs late in the pregnancy often require hospitalization, respiratory support and/or tube feeding, and are at an increased risk for developing persistent pulmonary hypertension of the newborn (PPHN). The latter is associated with significant complications and even death.

It is presumed but not proven that Pristiq could trigger such issues.

Patients should carefully study the benefits and risks before making a decision. However, they should not stop, mitigate or lessen their dosage without close consultation with a doctor conversant with their case.
READ ABOUT EFFEXOR BIRTH DEFECTS LAWSUITS