An Effexor lawsuit has been launched by an Ohio couple who allege the antidepressant had a role to play in the death of their infant daughter. Glenn and Lauren Boyer allege that the severe Effexor birth defects suffered by their daughter Adelaide, including a malformed aorta and mitral valve, were caused by the Wyeth product. 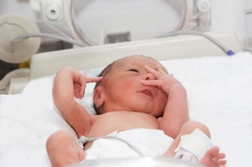 What makes this action significant is it appears to be the first Effexor lawsuit alleging birth defects. Lawyers Weekly USA (2/17/12) notes that while prior Effexor lawsuits have involved risk of suicide—and while Effexor has been linked to birth defects in the past—this particular product liability lawsuit is believed to be the first of its kind alleging Effexor heart defects resulting in death.

According to the lawsuit, Boyer was prescribed Effexor by her doctor and continued to ingest Effexor while she was pregnant with her daughter. Her 17-count lawsuit claims that defendants Wyeth Pharmaceuticals and Pfizer Inc. were well aware of the risks and dangers inherent with venlafaxine and Effexor baby heart defects, but rather than provide fair warning to consumers, the defendants instead concealed, suppressed and failed to disclose the risks, according to lawyers representing the family.

"Prior to the time that Mrs. Boyer ingested Effexor during her pregnancy, Pfizer and Wyeth knew of the dangerous birth defects associated with Effexor's use during pregnancy from preclinical studies and subsequent published studies confirming these risks," the complaint states. "Pfizer and Wyeth took no action to adequately warn or remedy the risks…"

The Effexor lawsuit includes strict liability claims for failure to warn and design defect, as well as claims for negligence, fraud and misrepresentation.

More EFFEXOR BIRTH DEFECTS News
The debate over whether or not to continue with antidepressants during pregnancy is ongoing. At issue is the risk to the mother (and subsequently to the unborn child) if a needed antidepressant is stopped, v. the potential risk to the infant if the drug is continued during a pregnancy, which effectively becomes an Effexor pregnancy.

In this case, the plaintiffs claim not to have known the risks of serious Effexor side effects. Their Effexor lawsuit claims that the defendant's withholding of the risks associated with Effexor to women of childbearing age constitutes fraud and misrepresentation, leading to their daughter's death.

Lawyers Weekly USA reported that the Effexor lawsuit was filed February 9 in the Pennsylvania Court of Common Pleas in Philadelphia, just inside the two-year statute of limitations window.
READ ABOUT EFFEXOR BIRTH DEFECTS LAWSUITS