"I'm Scared to Death of the Fentanyl Patch"

Tony was a commercial diver for 25 years until a year ago when he was diagnosed with bone necrosis (dysbaric osteonecrosis), a painful disease that is well known as a long term consequence of diving. To help manage the pain, his doctor first prescribed morphine then he started wearing the fentanyl patch. "I am scared to death of these fentanyl Duragesic patches," says Tony. 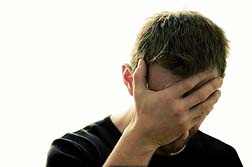 "I was on slow-release morphine before getting the patch but I was so tired of taking pills that my doctor suggested I try the fentanyl," says Tony. "I thought it would be a good alternative rather than swallowing so many pills three times a day. But in retrospect I would rather be on the pills—I had more energy and they are probably safer.

"At first the fentanyl patch seemed to be working well but sometimes I would get 'cold' patches, meaning they wouldn't last the 3 days. [The Duragesic fentanyl patch is supposed to be changed every 3 days]. I would get anywhere from 12 to 48 hours of relief but occasionally I would get a 'hot' patch and not change it for 5 days. I was used to changing it every 3 days no matter what. If I changed the patch more than that, my doctor might think I was abusing the drug." Consequently, Tony often endured pain for one or two days…

"The last time I had a hot patch I was extremely lethargic and slept most of the time," he explains. "When it first happened I had no idea what was going on. I definitely had no pain when I wore a hot patch. But I just feel dopey all the time and it takes me a long time to wake up in the morning

I was on the same dosage for about 8 months and then my doctor upped the amount to 125 micrograms--from 100 micrograms," says Tony. "I mentioned this problem—that all patches are not created equally-- to my doctor and he had no comment; in other words he doesn't have a solution. I think that he believes the manufacturer rather than his patient, like many doctors will do.

I talked to my doctor about coming off the patch but he thinks it will be a step backwards—I think it might have something to do with the medical profession getting a kickback from the Duragesic patch manufacturer. I would like to change doctors but that is pretty much impossible here in British Columbia, at least right now.

More FENTANYL News
I really don't know what to do because I am scared to death of these damn things: I don't know what is in store every time I put one on. I have made a point of not changing them in the evening before bed: I am afraid of getting a hot patch and not making it through the night.

The bottom line is that I believe this is a dangerous drug and it should come off the market. To anybody wearing these patches: whatever you do, don't change them before going to bed; that is the worst and the most dangerous time. "

You could say that Tony is one of the lucky ones: other fentanyl users have overdosed on the drug: LawyersandSettlements interviewed one man whose brother wore the patch and died in his sleep.