Duragesic Pain Patch: "Afraid I Was Having a Heart Attack"

People who have suffered serious side effects after using the Duragesic Pain Patches are now wondering if the patches may have caused their health problems. Lynn S (not her real name) is one such patient. She only used the pain patch for a couple of weeks, but says that in that time, she suffered multiple problems.

"When I used the patch, I felt spaced out, I had headaches and nausea, and I was dizzy," Lynn says. "I was dizzy all the time. I would fall over things when I was walking and I had to lay down most of the time. The thing is, I still wasn't comfortable lying down. I couldn't sleep—I couldn't even close my eyes. It just had me mentally messed up. 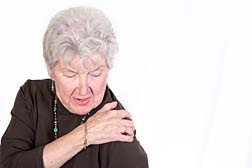 "I was on the pain patches for two weeks. The doctor prescribed them for fibromyalgia, osteoarthritis and a slipped disc. I was in pain all the time but the patches did actually kind of ease that pain.

"When I was on the patches I also had trouble breathing, shortness of breath and pain in my chest. I was afraid I was having a heart attack or something. My heart was beating fast. I knew it was because of the patch because I wasn't taking anything else at the time.

"I decided to stop using the patch. About three days after I stopped, I began to feel better. I still have pain but the problems that the patch gave me haven't come back since then. I guess if somebody had a higher tolerance for strong medicine they might be able to use the patch, but my tolerance is not that strong so I couldn't use it."

It has been reported that some patients have died after using the Duragesic Pain Patches, leaving family members wondering if the patch caused their early death. One man, whose wife had breast cancer, writes that his wife was put on the patches because of pain related to her cancer. One morning, the man woke up to find his wife in severe distress and unable to breathe. He called 911 and she was taken to the hospital, where she was diagnosed with respiratory failure. His wife passed away within a couple of hours. He asks, "...would my wife have lived any longer if her condition were not worsened (possibly) by a drug overdose?"

More News
That is a question people are asking upon learning that their loved ones may have actually suffered from a fentanyl overdose. Many of the patients who were given the Duragesic Pain Patches suffered from cancer and were given the patches to relieve their pain. Although they may have had terminal cancer, it is possible that they could have lived longer if they had not been given the fentanyl patches.

The Duragesic Pain Patches are allegedly defective, allowing the incredibly potent fentanyl gel to come in contact with the patient's skin. This can cause a fentanyl overdose, which is potentially fatal. Patients and their families are now investigating a possible lawsuit against the maker of the Duragesic Pain Patch, alleging that defects in the patch posed serious health risks to patients.