Duragesic Patch: Fentanyl is a Cousin to Heroine

While fentanyl pain patches under the brand name Duragesic and other generics are described as a godsend for people with chronic pain, abuse of the highly potent drug is on the rise, especially by young people.

The day before St. Patrick's Day, while many with Irish blood coursing through their veins were getting a head start on the annual celebrations, a 17-year-old high school student from North Carolina quietly affixed a fentanyl patch to each arm, and soon stopped breathing. He didn't survive, and died in his sleep. 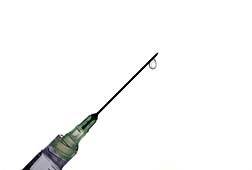 Mathew Chapman is just the latest victim of a drug that is 50 times stronger than heroin when taken intravenously. While the patch is designed to be worn on the skin for a controlled, albeit extremely potent dose of pain medication appropriate for chronic sufferers conditioned to such strong medication, the potential impact to patients not used to the rigors of opiates can be devastating.

Worse, there are increasing reports that teens have taken to stealing the patches, opening them up and injecting, licking, or smoking the contents.

In comments appearing in the Citizen-Times of Asheville NC, the boy's father said his son simply had no idea just what he was dealing with. Wearing a single patch, without having been previously exposed to fentanyl or similar medication would be risky enough. Two patches at the same time can, and in this case was a death sentence.

In recent weeks the makers of Duragesic pain patches have issued a recall over fears a manufacturing defect—a slight breach, or cut in the walls of the internal reservoir—could result in too much fentanyl escaping the patch, allowing for a potential overdose for either the patient, or even a caregiver handling the patch.

However, that warning has taken on new meaning as the abuse issue continues to mushroom.

Emergency room doctors have been reporting an increase in deaths related to fentanyl abuse, according to a report last year issued by the Centers for Disease Control and prevention (CDCP) in Atlanta. And just as oxycontin became sought-after amongst drug abusers looking for the latest prescription drug to exploit, fentanyl appears to be emerging as a preferred option.

The Duragesic pain patch, and others sold generically are most commonly prescribed for cancer patients, and others with chronic pain. Experts in the pain field maintain that when properly prescribed and used, the medication is extremely effective, and provides much-needed relief for patients conditioned to the kind of potent narcotic pain medications needed to quell intense, debilitating pain.

That said, all agree there is a fine line between effective pain management, and extreme danger should the patch ever fall into the wrong hands. The same thing happened with oxycontin, a potent pain tablet designed around a specific time-release formula. Again, for patients for whom oxycontin was properly prescribed, it was a godsend.

However, it wasn't long before drug abusers discovered that the potent opiate-based medication could be released in one shot simply by grinding the tablet up.

Enter the fentanyl patch, which reportedly is becoming one of the drugs of choice at parties. There have been reports of abusers licking the patches, or extracting the contents. Some will take it orally. Others will mix it with tobacco and smoke it. Still others will inject the drug directly into their veins.

On February 20th, Narconon Drug Rehab, a facility located in Atlanta, GA, issued a public warning that abuse of fentanyl is increasing at an alarming rate. A powerful synthetic opiate whose chemical structure is similar to that of morphine and heroin, fentanyl can also deliver the same effects as heroin, in the wrong hands.

A spokesperson in the drug rehab industry suggests that fentanyl, when either abused, or simply mishandled by someone unfamiliar with the drug's toxicity, can cause fatal hypoventilation in similar fashion to that which can be brought on by overdosing on heroin, oxycontin or methadone—all falling within the opiate family.

On December 21st of last year the US Food and Drug Administration (FDA) weighed in with yet another warning about fentanyl, beyond the recall by Duragesic for the potentially compromised reservoirs.

Rather, the FDA focused on the careful, and cautious prescription of fentanyl pain patches only for whom the drug is appropriate, and that the patch is used exactly as directed. The agency also articulated the importance of establishing opiate tolerance before the fentanyl is prescribed.

More News
The FDA warning applies only to the fentanyl patch, and no other forms of fentanyl.The FDA issued a similar warning in July, 2005.

It should be noted that the Duragesic fentanyl patch has been described as 'a gift' for whom the drug is designed and appropriately prescribed—and that a manufacturer cannot be blamed for the wonton disregard for the law, or safe usage demonstrated by criminals.

However, the oxycontin debacle of last year serves as a reminder that when a potent, and potentially lethal product is designed for consumer use (as opposed to confinement within a controlled environment, such as a hospital), a manufacturer is wise to be aware of the potential for misuse.

Misuse that could result in serious injury, or even death.