Duragesic patches are meant to alleviate pain in patients who have moderate to severe chronic pain. They are used to give a continuous dose of medication to patients who are not responding to other pain relievers. However, some patients are experiencing extreme reactions to Duragesic patches, including addiction. Furthermore, some of the patches have a manufacturing defect that could be fatal to patients and caregivers.

Rhonda C. says her mother was put on the Duragesic pain patch because she had cancer, was undergoing radiation treatment and was in a lot of pain. Initially, she was given the 100 mg dose patches but was lowered to 25 mg in fall 2007. 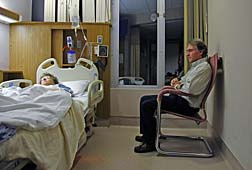 "A few days before Christmas, she got really sick," Rhonda says. "Her sodium and potassium levels dropped and they [doctors] had to hydrate her. She started experiencing withdrawal symptoms, which we didn't know at the time. We put the pieces together later. She went through really bad withdrawal from it. We woke up and found her on the floor because she was having seizures from this. She was hospitalized because of it.

"She's lost 12 years of her life that she has no recollection of. When she was in the hospital, she thought she lived at the address she grew up at. She lost a grandson in 1996, but didn't remember losing him. She was asking us questions about him.

"We almost lost her back in December. We had to make the call on what to do if she quit breathing, that's how close to death she was. She is sleeping most of the time now and can't even stay awake to eat. She forgets where she puts things. She's exhibiting a lot of addictive and drug-seeking behaviors. She has seizures and withdrawal symptoms.

More News
"I don't see any reason for them [Duragesic patches] to be on the market. Not if they'll do that to somebody. I can recognize the signs of addiction and I've watched my mother experience it. She has repeatedly had seizures. They [doctors] had to wait until she was finished having a seizure before they conducted tests.

"I just want people to beware of these patches. They are nothing to play around with. I hope nobody has to experience what I've experienced. It turns a grown woman into a child."

Duragesic patches are made with a high concentration of fentanyl, which is an opioid agonist. It allegedly has a high risk of abuse and addiction. The patches were recently recalled because of a manufacturing defect that allows the fentanyl gel to come into direct contact with the patient's and caregiver's skin. Such contact can cause a potentially fatal overdose.