The Chairman and CEO of Eli Lilly, Sidney Taurel, has become a regular pen pal with lawmakers on Capitol Hill since the company's ten-year campaign to increase profits by promoting the off-label use of Zyprexa for patients covered by public health care programs became the focus of investigations in both houses of Congress.

According to the March 23 edition of the New York Times, Zyprexa costs more than $300 a month and is the single biggest drug expense for state Medicaid programs, with spending of more than $1.3 billion in 2005.

Although Zyprexa is FDA-approved only for the extremely limited use of treating schizophrenia and bipolar disorder in adults, SEC filings show Zyprexa is Lilly's top-selling drug with overall sales of $4.36 billion in 2006. 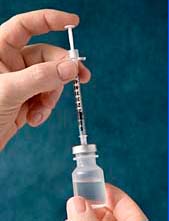 According to Pennsylvania psychiatrist Dr Stefan Kruszewski, Zyprexa increases the risk of obesity, diabetes, hypertension, heart attacks and stroke and taxpayers are now footing the bill to care for patients injured by the drug.

On June 12, 2006, the New York Times reported that the cost of atypical-induced medical conditions was taking a toll on publicly-funded health care programs. "Mental illness is itself a money sponge," it noted, "an expense borne largely by tax dollars."

"But that cost may be dwarfed," the Times said, "by the bill to manage the heart attacks and amputations that diabetes bestows."

A 2003 survey by the city's health department found that about 17% of adults surveyed, or 52,000, had diabetes. The Times noted that more mentally-ill patients were dying from diabetes and complications like heart disease than from suicide. "Uncontrolled diabetes can ruin a person's life as much as uncontrolled schizophrenia," Dr Newcomer, a professor of psychiatry at Washington University School of Medicine in St Louis, told the Times.

On April 4, 2007, as a ranking member of the Senate Committee on Finance, Senator Charles Grassley (R-IA), sent a letter to Mr Taurel, saying, "I have an obligation to ensure that the public's money is properly spent to provide safe and effective treatments to the vulnerable populations that are beneficiaries of the Medicare and Medicaid programs."

"I am aware of several pending product liability actions regarding Zyprexa," he said, "and questions have been raised regarding safety information and marketing practices relating to that drug."

Senator Grassley also wrote, "I understand that Eli Lilly produced certain documents in the course of these litigations that shed light on issues of interest to the Committee," referring to documents produced in litigation that were kept under seal with a court order until they were quoted in the New York Times in December 2006, which showed that Lilly knew about the serious health risks of Zyprexa for over a decade and had engaged in an off-label marketing scheme called "Viva Zyprexa."

Senator Grassley told Mr Taurel, "please provide to the Committee all documents and materials, including, but not limited to, emails, letters, reports, and memoranda, that were made available ... pursuant to pretrial discovery in In re Zyprexa Prods. Liab. Litig."

Anchorage attorney Jim Gottstein, director of Law Project for Psychiatric Rights, provided the documents to the Times after he subpoenaed them for another case from Dr David Egilman, who was retained by the plaintiffs as an expert witness in the underlying Zyprexa litigation and became so alarmed by what he found in the sealed documents that he went looking for a legal way to warn the public.

According to Mr Gottstein in a February 13, 2007, interview with the Anchorage Daily News, Lilly's hidden document showed the rate at which Zyprexa causes diabetes, massive weight gain and other metabolic problems and that Lilly trained sales staff to mislead doctors about the drug's association with diabetes and illegally promoted Zyprexa for off-label use with children and the elderly.

"Thanks to the FDA," she says, "there was no warning on the label of Zyprexa even though two other countries had made Lilly place warnings about diabetes, hyperglycemia, and death."

For its part, the secret documents show that Lilly was not the least bit concerned that patients like Ellen's son were developing diabetes. The company's one and only worry was that sales would fall when the news about Zyprexa's link to diabetes became made public. A July 7, 2003, "Diabetes Update" memo discussed the company's strategy to counter the negative impact on doctor's prescribing habits when news of the FDA's decision to add a black box warning about the diabetes risk to the label of Zyprexa became public.

"We must embrace the fact that many physicians are curtailing their use of Zyprexa (particularly in the moderately-ill patient and in the maintenance phase)," the Update said, "solely on the basis of personal fear (of being sued)."

To ward off the drop in Zyprexa prescriptions because doctors were afraid of being sued, the Update said Lilly should offer to indemnify doctors, in other words, cover any lawsuits filed against doctors as a result of prescribing Zyprexa. "Indemnification represents the most meaningful demonstration of confidence in Zyprexa--both with our customers and with our employees," the Update stated.

This plan was apparently successful with doctors after the risks of Prozac became public when documents disclosed in litigation that were also kept hidden under a court order were revealed in a subsequent lawsuit. "Our experience with Prozac," the Lilly memo states, "confirms the impact and goodwill of such an initiative."

The Update also describes a plan to pay millions of dollars to the most notorious industry-funded front group in the US, the National Alliance on Mental Illness, to organize nationwide campaigns to discount the claim that diabetes was caused by Zyprexa.

The strategy for NAMI described in the memo was to "mobilize our allies" and provide "NAMI a multimillion dollar grant to stage a national screening" to "help educate physicians and patients on the inherent risks of diabetes--regardless of the antipsychotic."

On February 13, 2007, Dr David Graham, the FDA whistleblower of Vioxx fame, testified at a hearing before the House Energy and Commerce subcommittee and recommended that lawmakers also investigate the FDA's handling of the Zyprexa matter, saying that the agency knew "for a long time" about the risk of weight gain and diabetes.

About 2 weeks later, on March 1, 2007, Mr Taurel received greetings from Rep Henry Waxman (D-CA), chairman of the Committee on Oversight and Government Reform, in a letter that requested information related to communications between Lilly and the FDA, including a list of trials, studies, or reports for any New Drug Application or Investigational New Drug application, including any supplemental applications submitted to the FDA.

The letter began by stating: "Allegations have been raised that Eli Lilly misled physicians and inappropriately promoted off-label uses of Zyprexa."

"As part of the Committee's ongoing oversight of the pharmaceutical industry's research and marketing practices," Rep Waxman wrote, "I am writing to request information relevant to Zyprexa and these allegations."

Rep Waxman also asked Lilly for copies of the secret documents obtained by Mr Gottstein, and a list of all trials, studies, or reports initiated, supported or sponsored by Lilly relating to Zyprexa, including any conducted outside the US, along with an exhaustive list of documents related to the promotion, marketing and sale of Zyprexa.

Federal law prohibits drug companies from promoting drugs for uses other than those approved by the FDA, and since 1998, FDA records show companies have been cited over 70 times for promoting drugs off-label. However, drug makers obviously continue to engage in these illegal marketing schemes because, in the end, the profits far outweigh any fines.

For example, Lilly continued to market Zyprexa for unapproved uses, even while the company was under investigation for doing the exact same thing with another drug. In December 2005, the US Department of Justice announced that Lilly had agreed to pay a $36 million fine and plead guilty to illegally marketing Evista for the prevention of breast cancer and cardiovascular disease although it was only approved for treating post-menopausal women with osteoporosis.

And just as Lilly concealed the health problems associated with Zyprexa, at the time that the company was promoting Evista to prevent cancer, Lilly in fact knew that the drug caused cancer. An October 24, 2002, press release by the Cancer Prevention Coalition reported that Lilly had suppressed a study in which Evista was "shown to induce ovarian cancer in rats and, at doses well below the therapeutic, in mice."

The press release noted "the strong scientific consensus that the induction of cancer in well-designed studies in two species creates the strong presumption of human risk."

Dr Samuel Epstein, Chairman of the Coalition, cited data showing "an 8 percent increased incidence of ovarian cancer in white females over 65, those most likely to be treated with Evista, from 1997 to 1999."

A $36 million fine was pocket change for Lilly in a year where the company reported 3rd-quarter sales for Evista of $770.8 million, compared to $755.4 million for the same period in 2004.

Allen Jones, a former fraud investigator in the Pennsylvania Office of Inspector General, Bureau of Special Investigations, has calculated the death rate in the US for patients taking atypicals in correlation with the total annual sales and determined that the ratio would be nearly 7 deaths for every million dollars, or about $162,000 per patient death.

In the latest development in the Zyprexa saga, on April 25, 2007, Alex Berenson reported in the New York Times that the FDA has "questions about a Lilly document from February 2000 in which the company found that patients taking Zyprexa in clinical trials were three and a half times as likely to develop high blood sugar as those who did not take the drug."

Alex Berenson is the reporter who broke the story on the secret documents and reported that doctors were provided information about the blood-sugar risks of Zyprexa which did not match data circulated inside the company, in the Times on December 21, 2006.

He quoted documents which showed that Lilly had examined 70 clinical trials and found that 16% of patients taking Zyprexa for a year had gained over 66 pounds. But instead of making these findings public, Lilly used data from a smaller group of trials that showed roughly 30% of Zyprexa patients gained 22 pounds.

According to SEC filings, about 1,300 Zyprexa lawsuits against Lilly are still pending, and the company is also facing Medicaid fraud lawsuits filed by attorneys general in 9 states so far.

If you have or a loved on has taken Zyprexa and suffered from diabetes or hyperglycemia, please contact a [Zyprexa] lawyer who will evaluate your claim at no charge.
Request Legal Help Now