"In 2003 I was pregnant with Sarah and was concerned about taking Zoloft," says Mindy Schildroth, "but my doctor said that recent studies indicated I was better off taking the drug than going through withdrawal. Three years later, I am still grieving her death." 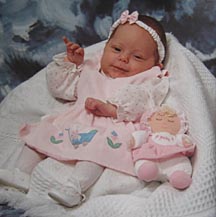 Sarah Elizabeth Schildroth
9/24/03 - 11/28/03
Mindy's daughter passed away when she was only nine weeks old. According to the autopsy, she died from a myocardial infarction - heart attack.

There were no problems during my pregnancy but Sarah was born five weeks early due to my uterus rupturing. She spent two weeks in neo-natal ICU and was released with a clean bill of health. Life was normal, I was still taking Zoloft and I breast-fed her since birth.

"I was prescribed Zoloft five years ago, after my son was born," says Mindy. "As soon as I was pregnant with Sarah I discussed it with my OB/GYN but he was adamant about me staying on Zoloft; I took 50 mg daily throughout my pregnancy.

At Thanksgiving, we all traveled to Charlotte, North Carolina for a hockey game. I was breast-feeding Sarah and she just died in my arms. We raced down to the first aid area at the hockey arena and someone called an ambulance. I don't remember too many details - I was hysterical at the time - but at some point, someone revived her. At the hospital I was ushered into a room by myself and a police detective sat with me. I didn't even get to spend our last moments together. (Because she'd had a clean bill of health, they suspected that I had done something wrong.)

A doctor asked me that, if her heart was going to stop again, did I want her to be resuscitated as she had gone a long time without oxygen. Before I had time to reply, someone came into the room and told me she had passed away.

They put Sarah in an area on the pediatric floor and they let me and my husband sit with her. I called my mother and father-in-law and they drove down to the hospital that night. I sat with her for several hours, and afterward, I was questioned by the police detectives. They did a complete autopsy and a few days later released her body to come back home to Atlanta. Then I upped my Zoloft to 100mg per day.

My doctor told me that if this had occurred at home, it would be considered a SIDS death. But just a few weeks ago, I read that serotonin levels are now linked to SIDS and of course I know what Zoloft is all about - serotonin. Next, I did some more research on the Internet and saw cases about Paxil and its link to heart birth defects. Then I saw Zoloft linked to coronary birth defects, especially when women take it in their third trimester. Paxil and Zoloft are both classified as SSRIs - just put two and two together... Also during this time, I looked on the Emory mental health website and they are still advising to take SSRIs while you are pregnant!

I think Zoloft caused my daughter's death and I want to scream from the top of the mountains to everyone - don't take this drug! I was so cautious about everything else - I wouldn't even go to my grandmother's house because she smoked.

We didn't have any insurance on Sarah and obviously had expenses that we weren't prepared for. She is buried here in Atlanta and now I feel that I can never move anywhere else - I will never leave her and I don't have the heart to dig her up to move her. My husband and I bought two plots side by side, and she is buried across the head of our two plots. My son was two years old when she died and it's been rough with all the questions. In his mind, only old people die and now he is afraid of dying. It has put our family through a lot, explaining and comforting him and trying to grieve at the same time.

I try not to blame myself. Ever since she passed away, I have always been searching for answers - wondering if I had done something wrong. Now that I know about Zoloft, I think that yes, I did something wrong, even though I wasn't knowledgeable at the time. Instead, I relied on medical advice.

I think Pfizer Pharmaceuticals either did research and didn't release it to the public because they wanted to make money, or didn't do enough research. (Obviously, it is unethical to perform clinical studies on pregnant women.) It has to be about the money - I know how much Zoloft costs compared to the generic brand.

As of this week, I am free and clear of Zoloft. It was hard but I gradually weaned myself off. I feel better about myself now, but feel like I am grieving all over again. But finally,
it is me dealing with Sarah's death and not the drug masking my grief. I hope to get pregnant again and I will never, ever take another SSRI for as long as I live. I'll eat a lot of chocolate instead.

If your baby was born with a birth defect, including heart defects and PPHN, please contact a [SSRI] lawyer who will evaluate your claim at no charge.
Request Legal Help Now