Merck has no Plan to pay Vioxx Victims

In 2006, Merck spent $500 million, including $175 million in the fourth quarter, in legal defense costs worldwide related to Vioxx litigation, according to SEC filings.

In addition, after reviewing actual costs and estimating future costs, the company says it has recorded a charge of $75 million to increase the reserve for future defense costs related to Vioxx to $858 million as of December 31, 2006.

However, although the legal team obviously plans to get paid well, there is no indication that Merck plans to pay any money to people injured by Vioxx because, according to the filing, Merck has not established any reserves for potential liability related to Vioxx.

Judging by the win-lose scorecard for Vioxx, it appears that juries are ignoring Merck's culpability in placing a lethal drug on the market with full knowledge that people would be injured and killed and that 100s of thousands of Americans were in fact injured and killed. 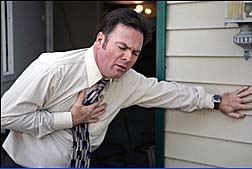 People who may have forgotten how much damage was done while Merck was raking in billions of dollars off Vioxx should go back and read the transcript of a November 19, 2004 hearing before the Senate Finance Committee, where Dr David Graham, a career scientist at the FDA who has no dog in this hunt, stated, "Vioxx has been a disaster."

"This is unparalleled in the history of the United States," he testified.

To give a clearer picture of the Vioxx disaster, he described the harm in relationship to the number of Americans who took the drug and experienced heart attacks and strokes. Based on an estimated range of 88,000 to 139,000 people, Dr Graham said, "Of these, 30 to 40 percent probably died."

He also offered a hypothetical scenario to help members of the committee recognize the magnitude of injuries and deaths caused by Vioxx, stating:

Dr Graham testified that research indicated that Vioxx caused up to 160,000 heart attacks and strokes and was responsible for an additional 27,785 deaths from heart ailments from 1999 to 2003.

Years later, nothing has changed as far as Merck getting honest about the known dangers associated with Vioxx. A study in the September 2006 Journal of American Medical Association found that heart problems could develop in Vioxx users much sooner than the 18 months that Merck claimed and, in fact, could develop in one month.

Still another study in the same JAMA issue found Vioxx to be associated with an increased risk in erratic heartbeats, or arrhythmia, and renal events including swelling of the hands and feet, high blood pressure and kidney dysfunction.

In addition, the filing notes, approximately 13,700 claimants had entered into Tolling Agreements with Merck, which halt the running of statutes of limitations for claimants who seek to toll claims alleging injuries resulting from a thrombotic cardiovascular event that results in a myocardial infarction or ischemic stroke.

The filing also reports that individual and putative class actions have been filed in state and federal courts alleging personal injury and/or economic loss. A number of these actions, it says, are coordinated in a separate proceeding in an MDL in the US District Court for the Eastern District of Louisiana, and in coordinated proceedings in state courts in New Jersey, California and Texas; and in the counties of Philadelphia, Pennsylvania, Washoe County, Nevada and Clark County, Nevada.

Legal experts agree that the greatest threat to Merck comes from class-action lawsuits seeking recovery under consumer fraud statutes with claims that Merck failed to disclose damaging information to the public and, as a result, received a higher price for Vioxx than it would have if the information had been disclosed.

Legal experts say the most worrisome is a class-action filed in October 2003, now pending before the New Jersey Supreme Court. In the case of International Union of Operating Engineers Local 68 Welfare Fund vs Merck, New Jersey State Superior Court Judge Carol Higbee held that New Jersey's consumer fraud statute applies to all Vioxx sales in the US and granted class-action status to third-party payors nationwide in July 2005.

Most purchases for Vioxx were made by health plans run by insurance companies and health maintenance organizations, and the Union case could include millions of Vioxx users. Considering that an estimated 20 million consumers used Vioxx in the US since it came on the market in 1999, legal experts says, Merck could get hit with a judgment worth billions of dollars if it loses this one case.

The plans say they lost significant amounts of money after being persuaded by Merck's marketing efforts to add Vioxx to their formularies, or the lists of drugs for which they agree to reimburse members. The Union alleges that Merck's marketing and advertising of the drug was fraudulent and misrepresented the safety and efficacy of the drug.

Third-party payors in this case can recover the actual payments made for Vioxx, and they are entitled to treble damages, as well as attorney fees, under New Jersey consumer fraud laws. For instance, if there were 10 million Vioxx users who each bought $1,000 worth of the drug through the benefit plans at the going price at the time of $72 for a 30-day supply, a judgment could conceivably reach $10 billion, in addition to attorney fees.

Unlike personal injury cases, attorneys for the Union do not have to prove that anyone was injured, all they have to show is that the third-party payors were influenced to purchase Vioxx by Merck's deceptive marketing and promotion of the drug.

In allowing the lawsuit to go forward, Judge Higbee drew no distinction between a company defrauding a person or a third-party payor. "This Court," she wrote, "sees no reason why the duty to be honest about the safety and usefulness of a drug when marketing it as a product for sale should not extend to the third-party payors who actually pay for the purchase of drugs for members."

On March 19, 2007, a five-judge panel heard arguments, and the Union's lead attorney, Christopher Seeger, told the court that, because Merck concealed the risks of Vioxx from the health care plans, the drug was chosen over about 30 other cheaper products.

Mr Seeger said, New Jersey consumer fraud statutes should govern the case because all of the decisions about what information was disclosed about Vioxx and how the drug should be promoted and advertised to the public were made at Merck's New Jersey headquarters.

"It's perfect for a class action," Mr Seeger said. "If we really want to deter bad conduct, as is alleged in this case, the way to do it is to protect every purchaser of the product."

Legal analysts say a ruling by the high court is not expected for several months.

Another class-action got the go-ahead in Canada on November 9, 2006, when Quebec Superior Court Judge Andre Denis authorized a lawsuit by Quebec residents who suffered "damages caused by the use of the medication," between October 1999 and September 2004, according to the November 11, 2006 Moose Jaw Times Herald.

Dimitri Lascaris, an attorney for plaintiffs in Quebec and Ontario, said there have been more than 20 requests for class-action Vioxx lawsuits filed in Canada but this is the first case that has received clearance to proceed.

If you or a loved one are taking or have taken Vioxx and have suffered from a heart attack or stroke, please contact a [Vioxx] lawyer who will evaluate your claim at no charge.
Request Legal Help Now

Posted by
elvira vasquez
on September 20, 2012
We were part of a class action. Years ago but we haven't heard anything. I have chronic astma, hypertension, high blood pressure, heart issues. Who cares about my suffering?