Prior to the arrival of the selective serotonin reuptake inhibitor antidepressants (SSRIs) on the market, depression was estimated to affect only 100 people per million.

And those 100 people per million sought help from a medical professional trained in psychiatry and the treatment of depression. 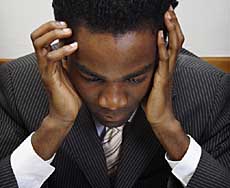 Since the introduction of SSRIs, rates for depression are now considered to be in the range of 50,000 to 100,000 cases per million, or between a 500 to 1,000 fold increase, according to The Marketization of Depression: The Prescribing of SSRI Antidepressants to Women, by Janet Currie, in the May 2005 journal Women and Health Protection.

And these days, those 50,000 to 100,000 people per million might obtain a diagnosis of depression from an online screening survey on a drug company web site followed up with a print-out coupon for a free prescription for an SSRI to take to a general practitioner.

To be sure, the survey generated diagnosis of depression will come with no recommendation for therapy, other than treatment with drugs with names like Paxil, Prozac, Zoloft, Celexa and Lexapro.

The uncomfortable feelings of sadness and unhappiness that result from the everyday trials and tribulations of life have been transformed into symptoms of a disease with the only cure being expensive drugs that come with an ever-widening variety of serious side effects and a life-long stigmatizing label of mental illness.

Dr David Healy is a professor of psychiatry at Cardiff University, a former secretary of the British Association for Psychopharmacology, and the author of over 120 articles and 12 books, including The Antidepressant Era and The Creation of Psychopharmacology.

He has major concerns about the prescribing practices for SSRIs. "The marketing of psychiatric drugs and the change of climate that this marketing brings about," Dr Healy says, "has turned what used to be physicians into what lawyers now refer to as pharmacologists."

"It has become standard practice in the US," he notes, "to get drugs from a pharmacologist and therapy from a psychologist or counselor paid at a lower rate."

"It means that the people who monitor the impact of therapy," Dr Healy explains, "are not trained at all to know about the hazards of that therapy."

"The overwhelming majority of people who are prescribed antidepressants," he says, "are at little or no risk for suicide or other adverse outcomes from their nervous state."

"Treatment runs the risk of stigmatizing the person," he points out, "as well as giving them problems that they didn't have to being with."

Critics say the successful marketization of depression is owed in large part to promotional campaigns orchestrated behind the scenes by SSRI makers who funnel money to industry backed front groups, who bill themselves as patient advocacy groups, and carry out the campaigns. Sharon Batt, of Dalhousie University in Halifax, Canada, recently began to study the behavior and funding of these groups after years working in breast cancer advocacy, where she noticed a general pattern.

Organizations that accept pharmaceutical funding, she says, "tend to advocate for faster review and availability of drugs, greater insurance coverage, and they tend to see 'direct-to-consumer' advertising as a benefit to patients."

On the other hand, groups that maintain financial independence, she says, "emphasise safety over speed and are critical of direct-to-consumer advertising."

These groups are used to both market depression and to put pressure on public health care programs and private insurers to pay for the expensive SSRIs.

A blatant example of an SSRI pushing front group, is the, "Depression and Bipolar Support Alliance," which received well over half of its funding in 2005 from the pharmaceutical industry. According to the October 28, 2006 New Scientist Magazine, combined information from its annual report and tax returns reveals that 77% of its revenue in 2005 came from 15 major donors, 12 of which were drug or device companies.

Another SSRI promoting front group is the, "Child and Adolescent Bipolar Foundation," which apparently fell out of favor with the drug company purse-holders when the black box warnings were added to SSRIs about the association between the drugs and child suicide and caused a drop in the number of prescriptions issued to children.

Although drug companies claim they neither get nor expect anything in return for the millions of dollars they funnel to these groups each year, according New Science, "concerns about the safety of psychiatric drugs in children, which reached new heights in 2004, have hit the Child and Adolescent Bipolar Foundation hard."

"Pharmaceutical companies are not as willing to support us because of increased scrutiny around psychiatric treatments in children," says Susan Resko, the foundation's executive director.

As a consequence, New Science reports, she has had to lay off more than half of her staff.


To the public these groups claim to be grassroots patient advocacy organizations. However, Drummond Rennie, professor of medicine at the University of California, and deputy editor of the Journal of the American Medical Association, told New Science that the word he uses to describe such organizations is "astroturf".

According to New Science, "astroturfing is the practice of disguising an orchestrated campaign as a spontaneous upwelling of public opinion."

Overall, of the groups studied by New Science, the most heavily funded groups were found to be those focusing on conditions where drug companies have been accused of "disease-mongering," a term described as encouraging healthy people to seek treatment

One of the more recent SSRI marketing campaigns involves the designation of a "National Depression Screening Day," promoted with TV and other media advertisements as a day when Americans can get a free depression screening at identified settings in local communities all over the country.

This national observance day provides the perfect forum for drug makers and their front groups to get out the messages that depression has reached epidemic proportions but is magically treatable with drugs. Funding for the screening day can be traced to all the usual suspects, the SSRI makers including Forest Labs, Eli Lilly, GlaxoSmithKline, Pfizer, and Wyeth.

The drug companies have also managed to infiltrate the nation's public school system to recruit children as SSRI customers by conducting random screenings on children, even though they show no signs of mental illness, using surveys with names like "TeenScreen," under the guise of preventing suicide.

Drug companies also zero in on college students. For example, Wyeth has sponsored seminars on college campuses called, "Depression in College: Real World and Real Issues," that feature professionals and celebrity patients to talk to students about depression and the need for treatment.

SSRI makers also place literature and posters in key areas all over the campuses directing students to online sites to get a free depression screening.

Critics, including many experts, have condemned the unscientific community and online screening surveys, especially when they are used to stigmatize children with a label of mental illness in the name of profits.

According to Dr Stefan Kruszewski, MD, a Psychiatrist and Addictionologist, from Harrisburg, Pennsylvania, "The identification of severe, biologically-based, mental disorders is an important issue-especially when they interfere with the academic and neurodevelopmental skills of our youngest citizens."

"However," he states, "the use of a subjective and poorly validated screening tool does not accomplish that goal."

"When manifest psychiatric problems are recognized by parents or schools," he says, "a referral should be made to an experienced clinician (psychiatrist, clinical psychologist, psychiatric nurse practitioner and/or neurologist), who works in consultation with parents and caregivers."

"This optimizes triage and treatment and avoids unnecessary mislabeling and stigma," he advises, "while protecting the individual liberties of those individuals who are afflicted with serious problems."

Other professionals use stronger words when describing what they refer to as medicating for profit schemes. According to Dr Fred Baughman, "its not just psychiatry, its what the whole medical profession is doing, for profit."

"I never thought I would see my profession so demean itself," he states.

Critics say patients are misled into believing that SSRIs will alter their feelings of depression or sadness by correcting a chemical imbalance. "The lynch-pin of all of this biological psychiatry-mental health," Dr Baughman says, "is the absurd contention that all mental constructs are diseases, propagated as the big lie, and propagated very skillfully," he adds.

For 15 years, neurologist, Dr Baughman, author of many books and papers on psychiatric drugs, including, "ADHD Fraud," reports that he has been asking professionals in his field to cite proof within the medical literature of the world that even one psychiatric "chemical imbalance" is a disease with a confirming physical abnormality.

Dr Baughman says he has never received an answer, "but the "diagnosing" and "treating" continues."

The "Depression Is Real," campaign consists of television, radio and print public service announcements and advertisements, and the group ran ads in publications like USA Today and the New York Times, which requires mega bucks.

That said, the key phrase in the announcement to kick off the campaign came at the end of the list of sponsors where it said the campaign "is made possible through the support of Wyeth."

In the public announcement, Sue Bergeson, President of the Depression and Bipolar Support Alliance, said, "Trivializing depression as a passing mood or, worse, an imaginary illness can discourage those who need treatment from seeking help."

She followed that up with a ridiculous over-the-top statement, that said, "That's not just counterproductive it's downright dangerous because depression is the principal cause of suicide worldwide, killing more people than homicides and terrorism combined."

Before making wild statements implying more people commit suicide, presumably because they are not yet on SSRIs, then people are murdered by terrorists or others, Ms Bergeson should have taken the time to watch the evening news to get an idea about the number of people killed in Iraq alone every day by terrorists.

SSRIs have been on the market for less than 20 years in the US, and every year, more and more serious adverse effects are found to be associated with the drugs, yet nothing seems to slow the momentum of their sales.

With the marketization of depression, SSRIs have become the top moneymakers and with the help of front groups, the free depression screening surveys have evolved into the most effective customer recruitment scheme to date.

Once a patient ends up at a doctor's door with a diagnosis and coupon for free SSRIs in hand, doctors do not send a patient for a good physical to rule out any medical conditions that may be causing the depression.

The patient is not asked whether a job was recently lost or a divorce is in the works or a breakup of a long-term relationship has occurred.

And in a 15-minute office visit, a patient certainly has no time to discuss the many possible reasons for feeling sad or unhappy that cannot be cured with any pill.

Public health officials in other countries have recognized and condemned the rampant over-prescribing of SSRIs. In April 2005, the British House of Commons Health Committee released a report that said SSRIs have been "indiscriminately prescribed on a grand scale," partly due to "data secrecy and uncritical acceptance of drug company views."

Industry promotions, the Committee said, have "worked to persuade too many professionals that they can prescribe with impunity."

The report pointed out that, "unhappiness is part of the spectrum of human experience, not a medical condition."

If you or a loved one has attempted or committed suicide while taking an SSRI, please contact a [SSRI] lawyer who will evaluate your claim at no charge.
Request Legal Help Now