"I got stuck in the Fen-Phen and Redux whirly gig," says author Hank Harrison of Sacramento. "Back then these drugs were safe as a dog in a fenced yard." 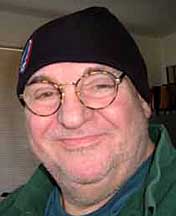 "Although I was fat I had no PPH [primary pulmonary hypertension] problems until I took Redux. I had pneumonia in 1995 and as a consequence I was bedridden for a year and gained 50 lbs.

When I got better, I went to the local medical clinic and had my blood pressure checked: it was a bit high but under control. I asked the doctor about taking Redux to lose weight but he told me to wait awhile. Instead, I was given free sample packs of Fen-Phen which I took for about six months followed by a prescription for Redux.

Nobody thought it was dangerous and I trusted my doctor at the clinic.

One year later my doctor told me to stop taking Redux. It was 1996. I had also heard that this drug was killing people and discontinued its use immediately. Besides, it wasn't doing me any good, I just got headaches. I was still overweight but otherwise healthy: I worked out, ate well, never smoked and seldom drank.

But as time went on I got weaker and weaker. It got to the point where I couldn't even get up the stairs - I just sat around and vegetated. I could write but that was about it. I couldn't even walk to the store.

From 1996 to 2003 my condition worsened. I found an attorney and joined a class action lawsuit against American Home Drug Company, the original manufacturers of Redux. My attorney gathered up about 150 obese people in the Sacramento area and we individually went to a specified clinic for extensive cardio testing, including an EEG and EKG. They were only looking for one thing - primary-pulmonary hypertension, or PPH. I didn't have PPH at the time so I didn't qualify for the class action. But I was suffering from chronic fatigue.

Five or six years later other symptoms were showing up such as asthma, weakness in the joints and an inability to breathe. I had to go on an oxygen machine and was treated for advanced asthma, but I was still OK as far as getting my work done.

Then about four years ago, I was having dinner with my wife and I started to talk gibberish. I was trying to tell my wife what a lovely meal she had prepared but all that came out was teacups and the golden gate bridge! She immediately got me into the car and drove a few miles to the hospital.

My heart valve finally gave out. I was only 62 and had a stroke. Let me tell you, it really scared me and sobered up my fat little butt!

I know Redux was responsible. I could tell because as soon as I started taking it, my health went downhill - not the first day but gradually. My immune system was compromised, I could look forward to pneumonia once a year and had chronic asthma. Then the heart condition and more obesity - I am now up to 425 lbs. I weighed in at 325 lbs when I started taking Redux: this is how I visualize myself: carrying three extra bags of dog food around.

Right now I am taking eight medications a day plus aspirin to make sure I don't suffer another stroke. Fortunately, I found out from your website that there are more lawsuits against the makers of Redux: I'm now a prime candidate to get back into a lawsuit."

Fenfluramine has been directly linked to primary pulmonary hypertension. Phentermine and fenfluramine (Phen-Fen) were combined and placed on the market in the early 1990s.

Redux, an appetite suppressant manufactured by American Home Products Corporation, contains the drug dexfenfluramine and is closely related to the diet drug fenfluramine (the "fen" in "fen phen"). Redux was approved by the FDA in 1996 to help obese patients in short-term weight loss. According to the FDA, at the peak of its popularity, doctors were writing over 85,000 Redux prescriptions per week.

Redux, sometimes used in combination with the drug phentermine (the "phen" in "fen phen"), was removed from the market in 1997 after studies found the drug responsible for causing heart valve disorders and deadly primary pulmonary hypertension (PPH).

Thousands of lawsuits have been filed against American Home Products -- the original makers of Pondimin (fenfluramine) or Redux (dexfenfluramine) -- and Wyeth.

If you or a loved one has suffered primary pulmonary hypertension (PPH) as a result of taking Fen-Phen and/or Redux, please send your [Fen-Pehn or Redux complaint] to a lawyer for a free case evaluation.
Request Legal Help Now