In March 2005, the FDA advised that Protopic should not be used in children under the age of two. That warning came six years too late for Madison. She was prescribed Protopic at 18 months old and diagnosed with leukemia when she was five. 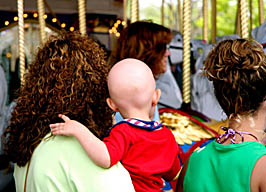 "My daughter has undergone chemotherapy, spinal taps and bone marrow taps," says Jody Haines (not her real name pending a lawsuit). "She has been hospitalized several times and of course has lost all of her hair - twice. It was agonizing for me to see, but kids seem to take it better than their parents."

"Madison had excema really bad and was prescribed Protopic in 1999. Nobody told me it was dangerous for anyone under two years of age, and I don't believe any doctors knew of the side effects - that it caused cancer. There were no black box warnings. Madison took it periodically until she was diagnosed with leukemia.

I just thought she had pulled a muscle; Madison complained of groin and leg pains. The doctor said she either had anemia or leukemia; two days later we got the results. I was in shock; I was so worried and I didn't know anything about leukemia. I know a whole lot about it now. After that she was in and out of hospital constantly; her first hospital stay lasted 30 days. It was March and Madison was enrolled in 3K so she only missed the last three months of school. She has been very brave through this whole ordeal, much braver than me. Even losing her hair, she took it well. (It has all grown back now.)

She has been sick off and on for many things. A month ago she had to have another bone marrow biopsy because the doctors thought she had relapsed, but it came back negative. She is now in remission but that can change... she goes to the doctor once a month but they say it takes 10 years before she can be considered cancer-free. She will have to be checked once a year forever.

I was furious. The doctors say they don't know what causes it. There are no blood cancers on either side of our family. There is a theory that leukemia is environmental but this is too much of a coincidence. One thing the medical profession does say is that leukemia is not a hereditary cancer, like many other cancers.

But since Madison was diagnosed, a lot more information has become available about Protopic. I just wish I knew."

If you or a loved on has developed skin cancer, breast cancer or other cancer and have been using Protopic, please contact a [Protopic] lawyer who will evaluate your claim at no charge.
Request Legal Help Now