Prempro Won't Get the Better of Me

Terry Wicks took Pempro for about 17 years - back then, hormone replacement therapy was the cure for menopausal side effects. Back then, nobody knew it could cause breast cancer and Wicks didn't give it a second thought; she was an athlete, in perfect health. But last year she finished 33 radiation treatments. 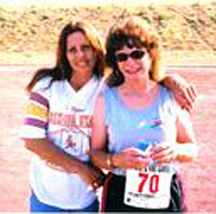 "I started Prempro when I began menopause at 51 years old - I am now 69," says Wicks. Even though I took it for about 17-18 years, I felt good, I was in really good shape." Wicks has won 74 medals for running and competes in racing events worldwide, but she started to have concerns.

"My doctor prescribed Prempro to stop bleeding in between my periods and it worked. It also stopped the usual side effects from menopause and she also told me that it would help my bones; she also said that there were no side effects.

But I read that some doctors were advising patients to go off Prempro and other HRT drugs if they had been on it for more than 10 years. My gynecologist still said there was no reason to discontinue Prempro because it was safe and I was in really good shape. It was nagging at me though and I did try to go off Prempro on my own, with devastating results. My ears were constantly ringing and I had terrible aches and pains; my hands were puffy and swollen and my mood swings were off the radar - I was a drug and alcohol abuse counselor so I know something about withdrawals; my body was reacting from the hormone withdrawal.

So my doctor told me to go back on the hormones, i.e. Prempro, and I would be fine. So I stayed on it. Then in September 2005, my husband felt a lump in my breast But my mammograms were normal every year, I couldn't understand it. Right away I had a sonogram and another mammogram. The mammogram again came back normal but the sonogram indeed showed the lump so my doctor referred me to a surgeon. He removed it in November 2005.

The surgeon told me it was invasive breast cancer and advised that I have my breast removed followed by chemotherapy and radiation treatments. 'Whoa,' I said, 'there's no way I'm agreeing to that.' So he gave me another option - to have a sentinel lymph node biopsy and take more tissue. I had this surgery one month later: it had spread to the sentinel nodes but none of the surrounding nodes. I decided to have radiation but no chemo. I finished 33 rounds of radiation in 2006 and was assigned an oncologist and radiologist. The oncologist suggested that I start drug therapy but I decided to take my chances and have a life instead. 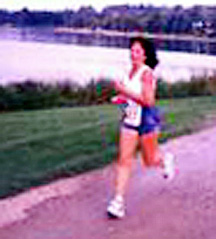 My cancer was hormone positive - meaning the cancer was feeding from hormones. This is why I know Prempro was the cause.

This week I have to get more lab tests and next week I am scheduled with the radiologist. My breast is painful and tender so forget about the mammograms.

Meanwhile, I am getting on with my life. I recently ran for breast cancer and got a second place medal for the '60 years old and over' category and I plan to run this year, even though I have problems with my bones. My joints are giving me a lot of trouble but I want to break the 70-year-old record - this cancer isn't going to keep me down.

It is a crying shame that this it had to happen - if I had better information about these drugs I would have had my uterus removed and found a way to survive without hormones. I had genetic testing done and there was no breast cancer in my family. I have been healthy and athletic all my life; I have seven kids and 28 grandkids.

As for my doctor, she has been in practice for 30 years; she is like a wizened old army doctor. And she still has articles in her office saying that HRT drugs like Prempro are safe. I hope women will do research first before they take a drug like this one."

Terry Wicks will be 70 years old this October; she says that this year will be the last year she competes - Wicks plans to run three track events in 2007.

If you or a loved one has suffered from breast cancer as a result of taking taken progestin or a combination of progestin and estrogen, or you were diagnosed with breast cancer while taking HRT or within one year thereafter, please contact a [Prempro] lawyer who will evaluate your claim at no charge.
Request Legal Help Now