The line up of attorneys supporting preemption for the device maker, Medtronic, in the US Supreme Court recently, demonstrates that no conflict of interest rules apply to attorneys who serve in the Bush Administration.

Mr Olson is the former boss of Edwin Kneedler, the Deputy Solicitor General who represented the Bush Administration in asking the Court to throw out the case, during oral arguments on December 4, 2007. 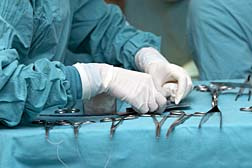 The case involved one lone citizen, Donna Riegel, whose husband died as a result of a faulty device, and the question for review was whether the preemption provision of the Medical Device Amendments to the Food, Drug, and Cosmetic Act of 1976, preempts state-law claims against Medtronic for injuries caused by medical devices that received premarket approval from the FDA.

Most of these attorneys would have worked with Mr Olson, Mr Carter and Mr Troy, on briefs filed in cases before the Supreme Court when they were members of the Bush Administration.

As expected, the Court ruled against the private citizen and threw the case out. On February 21, 2008, the New York Times called it "a victory for the Bush administration."

However, that victory may be short and sweet, because the Times also quoted Senator Edward Kennedy (D-MA), who sponsored the device legislation in 1976, as saying Congress never intended for FDA approval to give device makers blanket immunity from liability for injuries caused by faulty devices. "Congress obviously needs to correct the court's decision," he stated.

In addition, Representative Henry Waxman (D-Cal), chairman of the House Committee on Oversight and Government Reform, who was on the House panel that approved the Amendments, was also quoted in the Times as saying: "This isn't what Congress intended, and we'll pass legislation as quickly as possible to fix this nonsensical situation."

The starting point for any preemption analysis is Congressional intent. What did Congress intend the words of a statute to mean when it was enacted. During oral arguments, Mr Olson professed to know what Congress "intended" when enacting the 1976 legislation.

However, he has never served in Congress where laws are made and his "public service" over the past 20 years has been limited to racing back and forth through the back door of the White House to do the dirty work for Republican Administrations in hopes of earning a position in the White House the next time a Republican President took office.

His success in helping George Bush Jr steal the 2000 election by representing him before the Supreme Court in Bush v Gore, which resulted in a 5-4 decision to halt the recount of votes in Florida, ordered by the Florida Supreme Court, no doubt earned him the appointment of Solicitor General.

Going back in time, from 1981 to 1984, Mr Olson was the Assistant Attorney General for the Office of Legal Counsel under President Ronald Reagan and Vice President, George Bush, Sr, and he later represented President Reagan during the Iran Contra scandal.

Prior to joining the Reagan Administration Mr Olson was a member of the Gibson Dunn & Crutcher law firm. The senior partner in the firm, William French Smith, was the personal attorney for President Reagan when he was governor of California.

After Mr Reagan became President, he made Mr Smith attorney general and Mr Smith brought two attorneys from his firm to Washington. He brought Ken Starr, another great patriot, to serve as his chief of staff and Mr Olson to serve as assistant attorney general in the Office of Legal Counsel.

Mr Olson's history of dirty dealings while serving in the Reagan Administration and his prominent role in the plot to oust President Bill Clinton from office during the 1990s, came back to haunt him and almost derailed his confirmation as Solicitor General in the current Bush Administration.

As a starting point in considering whether Mr Olson was an appropriate candidate to serve as Solicitor General, at a May 17, 2001 hearing, Senator Patrick Leahy (D-Vt) described what a person in this high position should be by stating:

"The Solicitor General must use his or her legal skills and judgment to higher purposes on behalf of the law and the rights of all the people of the United States."

Senator Leahy further stated that the Solicitor General is the only government official who must be, according to the statute, "learned in the law."

"The Solicitor General," he pointed out, "must argue with intellectual honesty before the Supreme Court and represent the interests of the Government and the American people for the long term, and not just with an eye to short-term political gain."

At one hearing Mr Olson described what he believed a Solicitor General should be, but he certainly was not describing himself when stating:

"The Solicitor General holds a unique position in our Government in that he has important responsibilities to all three branches of our Government. . . . And he is considered an officer of the Supreme Court in that he regularly and with scrupulous honesty must present to the Court arguments that are carefully considered and mindful of the Court's role, duty, and limited resources.

"As Professor Drew Days said to this committee during his confirmation hearing 8 years ago, the Solicitor General has a duty towards the Supreme Court of 'absolute candor and fair dealing.'"

On May 11, 2001, the Washington Post pointed out that Mr Olson had been accused of providing misleading testimony when he worked in the Reagan Justice Department. The story behind this assertion is that Mr Olson was the subject of an independent counsel investigation himself in the mid-1980s, after a finding by the House Judiciary Committee that he lied to Congress to cover up the Reagan Administration's political use of a "Superfund," set up to fund the clean-up of hazardous waste sites, in doling out sweetheart deals to favored companies through the Environmental Protection Agency.

During the investigation, the Administration asserted executive privilege to withhold documents that had been subpoenaed by a two House Committees. An October 25, 1982 memo to President Reagan authored by Mr Olson, stated that the documents withheld contained no evidence of wrongdoing by Administration officials, a condition for asserting executive privilege, and "The Administrator [Anne Gorsuch Burford] concurs in this recommendation", This memo later became the lightening rod in the investigation.

First of all, the EPA Administrator, Ms Burford, had not agreed that the Administration should claim executive privilege and refuse to turn over the documents, and second, the documents withheld did contain evidence of wrongdoing by Rita Lavelle, the EPA Assistant Administrator, who was later convicted of perjury and obstruction of justice.

Pursuant to a directive signed by President Reagan, Ms Burford asserted executive privilege in response to both subpoenas in December 1982, and both committees cited her for contempt of Congress. From there, the investigation snowballed and Mr Olson hung Ms Burford out to dry and left her with no choice but to resign on March 9, 1983.

On March 10, 1983, Mr Olson was called to testify before the Judiciary Committee about the advice given by the Justice Department that led to the withholding the documents. The October 25, 1982 memo had still not been provided to the committee, yet when asked whether the Justice Department had turned over all the documents pertaining to the advice given to President Reagan, Mr Olson stated:.

"Well, Mr. Chairman, we tried to provide everything that we have that pertains to the advice that we have given. Most of those documents are published. I don't include handwritten notes of my own. I make Xerox copies of cases and make notes in the margin. There are scraps of paper probably everywhere. I'm not sure that we've included everything. We've included everything that we think is relevant to the questions that you've asked and to the advice that we've given."

In a February 1983 letter, the committee chairman had asked the Justice Department to "supply all documents prepared by or in the possession of the Department in any way relating to the withholding of documents that Congressional committees have subpoenaed from the EPA."

Mr Olson left the Justice Department and returned to Gibson Dunn & Crutcher, in the spring of 1984, and in the end, the Judiciary Committee obtained access to virtually all the documents sought. But the battle with the Justice Department to obtain the information turned out to be more exasperating than dealing with the EPA controversy itself. In its final December 1985 report, the Committee concluded that:

"[T]he Department of Justice, through many of the same senior officials
who were most involved in the EPA controversy, consciously prevented
the Judiciary Committee from obtaining information in the Department's
possession that was essential to the Committee's inquiry into the
Department's role in that controversy.

"Most notably, the Department deliberately, and without advising the Committee, withheld a massive volume of vital handwritten notes and chronologies for over one year.

"These materials, which the Department knew came within the
Committee's February 1983 document request, contained the bulk of the
relevant documentary information about the Department's activities
outlined in this report and provided a basis for many of the Committee's
"findings."

The Reagan Administration was compelled to appoint an independent counsel by the Judiciary Committee in 1986, to determine whether charges should be filed against Mr Olson for his part in covering up the EPA scandal.

In 2001, Ms Burford published the book, "Are You Tough Enough? An Insider's View of Washington Politics," and wrote:

"The people at Justice behind the push for executive privilege were all presidential appointees who, to be blunt, shared several characteristics: (1) they didn't have enough to do; (2) they weren't very good lawyers; and (3) they had tremendous egos. They wanted to make a name for themselves in Washington, and one way to do that while they were at Justice was to have their names on a Supreme Court case."

When President Reagan left office, Mr Olson was his attorney during the Iran-Contra scandal, in dealing with the Independent Counsel's office and directing President Reagan's now famous, "I don't recall" testimony, in the legal proceeding and trials of other Reagan Administration officials and White House aides.

Jumping ahead to a more recent lawyering endeavor by Mr Olson on behalf of the Bush Administration, on May 16, 2007, Amy Kotz reported in "The American Lawyer," that a report by a special committee of the World Bank Group, questioned Gibson, Dunn & Crutcher's review of World Bank president Paul Wolfowitz's transfer of his girlfriend, Shaha Riza, to a high-paying job at the US Department of State.

Ms Kotz noted that documents released by the bank showed that Wolfowitz asked Gibson to review the deal in the summer of 2005 and a Gibson Dunn team, including Theodore Olson and Eugene Scalia, concluded that the contract was "a reasonable resolution of the perceived underlying conflict of interest."

Gibson landed the assignment because of its "ability to present a strong team within 24 hours," according to a memo from a Wolfowitz aide that was released by the board. This team included former Solicitor General, Theodore Olson, and employment partner, Eugene Scalia, Ms Kotz reports.

That would be the son of Supreme Court Justice Antonin Scalia, the Justice who wrote the opinion in Medtronic.