Its real easy for drug eluting stent makers to say patients already implanted with these devices must take a combination of the blood-thinning drug, Plavix, and aspirin for the rest of their lives. But what happens to the patients who cannot afford Plavix?

It appears now that many patients unlucky enough to be have received these new devices, will be doomed to live out the rest of their lives wondering whether each day might be their last.

On December 11, 2006, the Wall Street Journal ran an article that quoted Dr Kevin Graham, the director of preventive cardiology at Minneapolis Heart Institute, who recently saw an elderly woman who already had a drug coated stent and was on Plavix, at a cost of $6 per day, on top of all the other drugs typically required by heart patients. 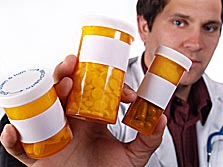 The woman said her monthly prescription bill was $436, and her social security check was just over $900. "She was literally crying," Dr Graham told the Journal.

As it turns out, the woman had hit the $2,250 dollar mark, or the now infamous "donut hole," in the granddaddy of all Bush-backed schemes set up to funnel tax dollars to Big Pharma, otherwise known as the Medicare prescription drug bill.

In a nutshell, here's how the scam works. A person enrolls in a plan offered by a private company and pays a monthly premium, a yearly deductible, and then a co-payment of 25% for each prescription. The 25% co-payment skyrocketed immediately in the first 7 weeks after the scam went into effect last year, because the companies offering the plans simply raised the prices on the drugs most commonly prescribed to senior citizens.

For instance, in one plan the cost of Plavix went from $114 to $161, a 42% increase, according to, "Medicare Drug Plan Prices Are Increasing Rapidly," a February, 2006 study prepared by the Minority Staff of the House Committee on Government Reform, Special Investigations Division.

Once the Minnesota lady above hit the $2,250 "donut hole," in addition to the requirement that she continue to pay her monthly premium, she would have to pay 100% of the costs for her drugs until she reached the $5,100 mark, or in other words, forks over $2,850 out of her own pocket. Which she will never do, because as her doctor told the Journal, she went off Plavix because she could not afford to pay for it.

And she certainly is not alone in this Plavix dilemma. Jose Flores, a 66-year-old school bus mechanic from Texas unknowingly fell into the doughnut hole and paid $20 for Plavix in April 2006. But when he went to get his next month's supply, he was handed a bill of $1,129 for Plavix, according to a June 2006, report by the Institute for America's Future.

Senior citizens will be hurt the most by a requirement of life-long Plavix treatment for drug eluting stent patients because the majority of DES are implanted following a procedure to remove blockages in arteries called angioplasty in patients who are over 65 and on Medicare.

However, it is not even clear that extended therapy with Plavix and aspirin will prevent blood clots, or late thrombosis, in DES patients. A presentation at the Transcatheter Cardiovascular Therapeutics meeting, in October 2006, by Dr Alaide Chieffo, reported that among 3,021 patients who were implanted with DES, 16 patients had developed late thrombosis, even though 9 of the 16 were already taking Plavix.

For many years, doctors have recommended aspirin to reduce the risk of heart attack and stroke. Aspirin works by blocking the development of thromboxane A-2, the chemical that causes platelets to clump together and form clots which cut off the blood supply to the heart or brain and cause heart attacks and strokes.

But because aspirin came with side effects like bleeding ulcers, researchers looked for ways to inhibit platelet function, and Plavix was developed and supposedly did not cause the bleeding side effects.

The study submitted with Plavix to support FDA approval, indicated that Plavix could reduce the number of heart attacks and strokes slightly better than aspirin, with aspirin preventing roughly 25% of such complications, and Plavix preventing about 33%.

However, 8 years later, on January 20, 2005, the New England Journal of Medicine published a study that reported Plavix to be more harmful to heart patients with a history of bleeding ulcers than aspirin therapy.

Since the drug's arrived on the market, many people with no previous history of heart attacks but who were considered to have risk factors for heart disease, have been prescribed Plavix together with aspirin as a preventative measure. That combination has since been proven to be as useless as it is dangerous.

A study by Dr Eric Topol, of Case Western University, and Dr Deepak Bhatt, of the Cleveland Clinic, presented at the American College of Cardiology meeting, on March 12, 2006, and simultaneously published in the New England Journal of Medicine, found that the combination of aspirin and Plavix in patients at high risk for atherothrombotic events, proved no better than aspirin alone at reducing rates of myocardial infarctions, stroke, or cardiovascular related deaths.

The study included over 15,000 people who either had multiple risk factors for heart disease, such as smoking, high cholesterol, high blood pressure, or diabetes, or who had established cardiovascular disease, defined by a previous heart attack, stroke, or poor circulation in the legs. The study participants were all at least 45-years-old and received either aspirin and Plavix or aspirin plus a placebo for an average of 28 months.

For the 20% of the patients who had no previous heart disease, only risk factors, the study found heart related deaths almost doubled with Plavix and aspirin, compared to patients who received aspirin and a placebo. An analysis of adverse events also showed that patients taking Plavix plus aspirin had a bleeding rate higher than those in the aspirin only group

In an editorial accompanying the study in the Journal, Dr Marc Pfeffer, of Harvard Medical School, and Dr John Jarcho, of the New England Journal of Medicine, said the risks and costs of the combination of aspirin and Plavix as a preventative measure appeared to outweigh the benefits. "The absence of a clear benefit in terms of outcome, coupled with an increased rate of bleeding ... argues against the use of dual antiplatelet therapy in this patient population," they wrote.

And that risk is high. Experts note that the blood-thinning effects of Plavix are long lasting and it takes the body between 7 to 10 days to get rid of the old platelets and make new ones, so if a patient would require emergency surgery during this time, a problem with serious bleeding could develop.

Plavix is marketed by Sanofi-Aventis and Bristol-Myers Squibb and according to an August 17, 2006, company press release, since its initial approval by the FDA on November 17, 1997, Plavix has been prescribed to more than 52 million patients worldwide.

Which means with 20/20 hindsight, tens of millions of patients have been conned into taking Plavix, with no apparent benefit, at a cost of $6 a day, instead of taking aspirin for pennies a day, which as it turns out has fewer side effects than Plavix.

If you or a loved one has suffered a stroke or heart attack while taking Plavix, please contact a [Plavix] lawyer who will evaluate your claim at no charge.
Request Legal Help Now