"My Mum started taking Permax in 1998 when she was diagnosed with Parkinson's disease," says Shaylene Tirella. "It wasn't long before her health took a downward spiral and she is now on life support due to heart problems and respiratory failure." Shaylene takes care of her mother 24/7. 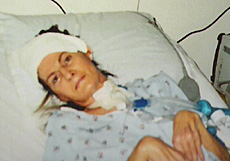 "My mother Vicky took Permax until 2005 and she seemed to get better - up until 2006," says Shaylene. "All of last year was a nightmare and now she is on life support. I have to learn all these medical procedures and I have a full-time job looking after my mother.

When Mum started taking Permax, her breathing started to become laborious. Her doctor didn't know what it was and never checked her. She had respiratory failure in August 2005 shortly after taking Permax. Leading up to August, she was tired all the time - she also complained of chest pains and shortness of breath. There is not much information we can get from Vicky because she is now on life support and has no ability to control her motor functions.

My Mum can't speak so this is how she communicates: I ask her a question and if she looks toward the TV, the answer is 'yes'. She is fully coherent and is aware of everything that is going on. She can only move her eyes to indicate yes or no and on a good day she can raise her hand a few inches, but that doesn't seem to be happening lately."

The FDA approved Permax in 1988 and it was withdrawn from the market on March 29, 2006 because it increased the risk of heart disease - seven years too late for Vicky and Shaylene.

If you or a loved one took Permax and subsequently developed heart problems, please send your story to a [] who will review your claim at no cost or obligation.
Request Legal Help Now