"It amazes me that Ortho-McNeil, makers of the Ortho Evra birth control patch, are still putting this product on the market," says Linda Hall. "After what I went through, I am so lucky to be here and thank god I am alive."

In January 2004, nobody knew the dangerous side effects from the patch. "I was told that it was safer than the pill and a lot more convenient. If you put this on, you didn't have to worry about taking a daily pill," says Hall (not her real name pending a lawsuit). 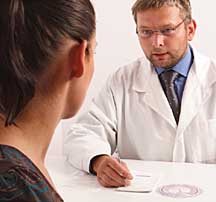 "I was put on the patch because I was having heavy periods. I was 36 years old and stayed on it for four months. I had no problems, no side effects. I was scheduled to have surgery because of my periods, but one week beforehand I woke up with, what I thought, were gas pains. I called in sick that day; as the day went on the pain increased - it would come and go. I tried to lie down later on that night but it took my breath away. I propped myself up in bed but by 2 a.m. I could barely breathe and the pain was terrible. At that point I knew something was wrong. I have two young girls so I called a friend to come over and I drove myself to the hospital.

As soon as I got to ER and explained my symptoms, they did an EKG and the results were normal. They thought it might be a pulmonary embolism so I had a CAT Scan and sure enough, they found two embolisms - one in each lung. I didn't know, even then, how serious this was. The worst part was that they gave me pain medication and my heart rate dropped so much I thought I was going to pass out. They brought in the 'crash cart' to resuscitate me. My mother had passed away a year before and I remember saying to myself, 'Mum, I'm not ready.' I really thought this was it. My second thought was this: What are my kids gonna do without me? Then my heart rate came back. That was the scariest day of my life.

They sent me for an ultrasound to see where the embolisms came from and found deep vein thrombosis - DVT. At that point I was admitted and had to stay completely still in critical care. I stayed on complete bed rest for about five days and stayed in hospital for a week. I was on heprin and coumadin, very high doses of blood thinners. The pain was still excruciating and I was very scared.

I had many doctors visit, including my gynecologist. He came by because I was scheduled for surgery the following week. Of course the surgery was cancelled. He knew I was on the patch and mentioned that it could have been the cause of the embolisms. To be honest, I still didn't think much about it - I didn't file a complaint until this year. Lots of people told me that I should seek legal action but I didn't. Then I finally came to my senses and realized that I don't want others to have to go through the pain that I suffered. I also thought a lot about my kids through all this - they could be without their Mum right now. At the time they were 11 and 7; they were too young to realize how ill I was.

I believe that I am one of the lucky ones - I read a lot of articles about the Ortho Evra patch and saw that a lot of women didn't survive. I want people to know they should not take this. It amazes me that it hasn't been banned!

One other thing I want to mention: I found out that if the FDA knew of the side effects, the patch would never have been approved. But the drug company knew; they knew how much more estrogen was in their product. So why haven't they taken it off the market? Because they are making millions of dollars. But is it worth a life? Put the drug makers in our shoes: would they want their wives and daughters on the Ortho Evra patch?

If you have or a loved on has suffered from blood clots, heart attack or stroke, while using Ortho Evra, please contact an [Ortho Evra] lawyer who will evaluate your claim at no charge.
Request Legal Help Now