When Kristin Gruber was prescribed the Ortho Evra patch, its direct link to blood clots, strokes and other serious side effects were unknown, at least by the medical community and women who wore the patch.

"Thank God I had the wherewithal to take the patch off when I did," says Kristin. "If not, I would probably have wound up in the emergency ward or worse, as so many other women have." 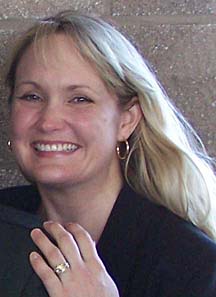 In 2003 Kristin was prescribed Ortho Evra because she was having heavy, painful periods. At that time, she asked her doctor if there were any side effects. "I thought it was great, I didn't have to take a pill every day. Instead I just put this patch on my body once a week for three weeks (not in the same spot) and leave it off on the fourth week," says Kristin. She didn't smoke, was in good shape and 34 years old. A prime candidate for Ortho Evra.

"Around September, 2006 I noticed very dark, purple spots under the skin on my fingers," she says. "They weren't like a blood blister because they were under the skin. And they were so painful that I couldn't use my fingers that were affected; they would last a few days then go away and show up on another finger. It was weird. Then I started to get headaches. But it wasn't until I saw something on television - about one month later - that I called my doctor. (My health is always on the back burner - my son has disabilities so this was low priority.) On the news we saw an ad that said Ortho Evra was linked to blood clots. I ripped that patch off so fast!

The first thing my doctor said to me was why I hadn't called her sooner. She concurred that I stay off the patch. By the time I saw her, the spots were gone, but my mother saw them and she knew what they were right away. And it is too coincidental that, once I took the patch off, these blood clots never came back.

But this is my problem: my hands, feet, knees and face go numb every now and then. I am going to a neurologist on January 10th and it is possible that one of these clots got loose and caused nerve damage. For example, the other day I was writing a check at a store and my hands went completely numb; I couldn't even sign my name and had to use my debit card. Sometimes when I am standing, my feet will go numb and I have to lean against something in case I fall down. I have seen my doctor many times about this. She has tested me and there is significantly less feeling on the right side of my body - I can't feel the difference between hot and cold on the right side of my leg. Right now, talking to you, my entire right leg is numb. This has never happened to me before.

I am very concerned, especially since I have two boys to take care of - ages five and seven. Before Christmas I had a couple of episodes that affected my memory; that was very scary. I couldn't remember putting the coffee insert into the coffee maker; I was saying 'thing' instead of filter, I couldn't remember what it was. I couldn't remember common items; it was like my brain was having a hard time firing. My memory seems to come and go in bursts. All of a sudden it is like my brain isn't connecting. This has never, ever happened before. My doctor is just as puzzled as me, and concerned.

And here's another thing: I was trying to write a letter and all of a sudden I knew what I wanted to say but couldn't make my hand move; it was very frustrating. (I am writing all of these incidents down for the neurologist.) I am taking college classes that involve writing so it isn't like I just write occasionally. It is like some kind of alien inside my body is doing things I can't control. I was so incredibly scared when this first happened, and now these incidents have occured more times than I can count. And my doctor thinks this is too much of a coincidence - she wants me to talk to the neurologist about Ortho Evra and to tell him that these symptoms came up right after taking the patch off.

I think that Ortho-McNeil should have been more forthcoming with their warnings and they should have done more research before putting the Ortho Evra patch on the market to so many vulnerable women. People have died from this; Lord only knows what would have happened to me if I hadn't taken it off right away. I can't believe the government lets these drug makers get away with putting these products on the market so soon - there should have been more stringent controls; their testing should been for a much longer time.

Obviously doctors have about as much education about this drug as their patients do. My doctor wouldn't have prescribed this drug if she knew of any side effects. I question whether Ortho-McNeil knew some of these side effects when it first went on the market, when it was distributed to so many young women who didn't take the patch off early enough and have suffered more than me. This was a quick and easy way to make money! I don't think these women mean anything to them. We are just a number in the black and maybe they will have to pay off some of us in a lawsuit, but they can certainly afford it. I am suffering a little but what about all the mothers and daughters who died, they have to live with grief every day. Their problems will never be resolved. They are the ones who need help."

If you have suffered from a blood clot, heart attack, or stroke, while using the Ortho Evra birth control patch, please contact a [Ortho Evra Contraceptive Patch] lawyer who will evaluate your claim at no charge.
Request Legal Help Now